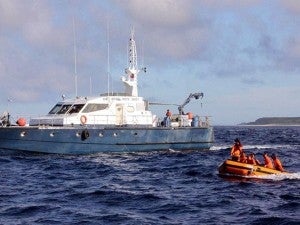 An undated handout picture released by the Philippines Coast Guard May 10, 2013 shows a Philippine government patrol vessel against illegal shipping being operated by the coast guard at sea. The Philippines admitted on May 10, 2013 that its coastguard fired at a Taiwanese fishing boat in an incident that authorities in Taipei said left a crewman dead and triggered widespread outrage on the island. AFP PHOTO / PHILIPPINES COAST GUARD

MANILA, Philippines—Facing yet another flashpoint over disputes in the West Philippine Sea, the country’s top diplomat said Saturday that the Philippine maritime agencies have initiated an investigation into the “unfortunate” shooting of a Taiwanese fisherman off Batanes, maintaining that the incident occurred during lawful operations within territorial waters.

Foreign Secretary Albert del Rosario said Saturday that the Philippine Coast Guard and the Bureau of Fisheries and Aquatic Resources are already looking into the incident Thursday, when PCG officers fired at a Taiwanese fishing boat in an apparent effort to defend themselves.

Taiwanese Hung Shih-chen, 65, was killed in the incident, raising a howl in Taiwan and strong demands for an investigation, apology and compensation.

In a statement on Saturday, Del Rosario said results of the investigation will soon be released. Notably, he referred to the shooting as an “unfortunate” incident that ensued amid legitimate anti-poaching operations of Philippine maritime agencies.

“The PCG and BFAR are now investigating the incident which resulted in the unfortunate loss of life of a Taiwanese fisherman during the routine lawful enforcement activities against poaching in Philippine waters,” said Del Rosario in a brief statement sent via text message.

“The result of the investigation will be made available in due course,” he added.

Asked whether Manila has already reached out to Taipei over the incident, Del Rosario said the Manila Economic and Cultural Office (MECO) “is in communication with the government of Taiwan.” MECO is the Philippines’ representative office in Taiwan.

The PCG had said its personnel only acted in self-defense in shooting at Taiwanese fishing vessel Kuang Ta Hsing No. 28, which at the time was sailing some 80 kilometers off the Balintang Channel near Batanes.

The vessel, then carrying three Taiwanese and one Indonesian as crew, allegedly tried to ram the Philippine patrol boat.

The Taiwanese side meanwhile alleged that the ship “came under attack” and that Philippine officers opened fire without any warning.

Now the subject of a Philippine plea before the United Nations arbitral tribunal, China was quick to criticize the incident, calling it a “barbaric” act.