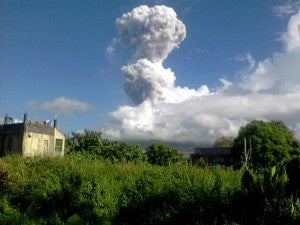 RESTIVE A mushroom of volcanic ash shoots up to the sky as Mayon Volcano spewed huge rocks and ash after daybreak Tuesday, killing at least five climbers and trapping more than a dozen others near the crater. AP

Thai Consul Rooge Thammongkol was immediately briefed by Office of Civil Defense regional director Raffy Alejandro on the condition of the Thai nationals injured when Mayon exploded ash while the Thai and their guides were climbing the volcano on Tuesday.

After the closed-door briefing, Thammongkol proceeded to the Bicol Regional Training and Teaching Hospital to visit the Thai survivors–Nithi Ruangpisit and Tanut Ruchipiyrak–who were rescued at the Centennial Park in Lidong, Sto.Domingo, Albay on Tuesday afternoon.

Thai national Boonchai Jattupornong, who was initially missing, was found by rescuers Wednesday and was reportedly being brought by rescuers to Legazpi City.