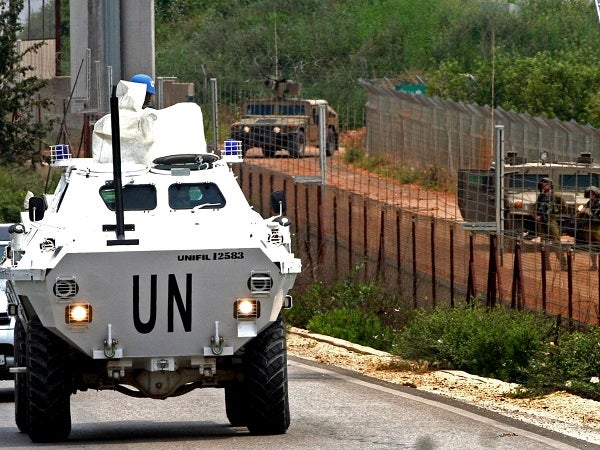 Spanish UN peacekeepers in an armored personnel carrier patrol the Lebanese border side, left, as Israeli soldiers patrol, right, at the Lebanese-Israeli border near the southern village of Kfar Kila, Lebanon, on Wednesday, May 8, 2013. The United Nations on Wednesday pulled peacekeepers back from an observation post in the Golan Heights ceasefire zone where four Philippine troops were abducted by Syrian rebels, a spokesman said. AP/LUTFALLAH DAHER

UNITED NATIONS—The United Nations on Wednesday pulled peacekeepers back from an observation post in the Golan Heights ceasefire zone where four Philippine troops were abducted by Syrian rebels, a spokesman said.

The move came as countries that contribute troops to the UN Disengagement Observer Force (UNDOF) expressed renewed concern about security in the zone between Israel and war-stricken Syria.

The Philippines called on the UN Security Council to “exert all influence” to obtain the release of the Filipino troops. The four were seized by Syrian rebels on Tuesday, only two months after 21 Filipino soldiers were abducted by the same group for four days.

The four were at an observation post in the Al Jamlah zone of the Golan Heights. Syrian activists said fighting has continued in the zone.

“In light of the evolving security situation, peacekeepers from that position have been relocated,” UN spokesman Martin Nesirky said.

UNDOF is “operating in an extremely dangerous and unusual environment,” he added.

Nesirky said the four Filipinos were believed to be still near Al Jamlah.

A rebel group calling itself the “Yarmuk Martyrs Brigade” says it is holding the peacekeepers “for their own safety.” The group also carried out the abduction of 21 Filipino peacekeepers in March.

“UNDOF has had indications that they remain unharmed. Efforts are still underway to secure their release,” said the spokesman.

UNDOF, which has been monitoring a ceasefire between Israel and Syria since 1974, has about 1,000 peacekeepers and civilian staff from Austria, the Philippines, India, Morocco and Moldova.

Nesirky said he had not heard about any country seeking to withdraw from the force. Security measures were already stepped up after the March abductions and many patrols curtailed.

But the Philippines called on the UN Security Council to ensure the safety of Golan peacekeepers. Austria’s defense minister also said there was an “exit strategy” but that there was no plan to leave at the moment.

The Philippines department of foreign affairs said it “underscores that the apprehension and illegal detention of peacekeepers are gross violations of international law.”

“The Philippines calls on the Security Council to exert all efforts and use its influence for the early and safe release of the Filipino peacekeepers, and ensure that the freedom of movement and safety and security of peacekeepers in all UN peacekeeping missions are observed.”

Foreign Secretary Albert del Rosario met with UN undersecretary-general for peacekeeping operations Herve Ladsous in New York late Tuesday to coordinate efforts to free the four, according to the statement.

Austria’s Defense Minister Gerald Klug, who is on tour of the Middle East including visiting the country’s 377-strong Golan contingent, told the Kurier daily that the risks were “controllable”.

“We have improved protection for the soldiers: better equipment for everyone and additional armored vehicles. The situation is tense. I will not sugarcoat it,” he was quoted as saying.

“An exit strategy is part of every military mission. We can respond at any time. At the moment I do not see a need for that,” he added.

Austria will “do our share as long as it’s possible. But I’ll say clearly: not at any price. Our soldiers’ security has the highest priority,” the minister said.

The Security Council is due to renew the UNDOF mandate next month.