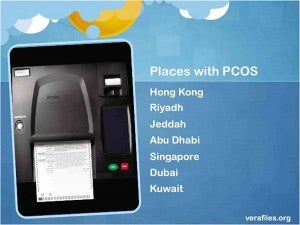 THE SEVEN overseas voting centers listed above are equipped with the Precinct Count Optical Scan (PCOS) machine. Polling places are open from 8 a.m. local time of the host country, and will close at 7 p.m. of May 13. Postal voting is also permitted.

Gary Garcia has been working as a seafarer for almost 10 years—and has been a registered absentee voter for just as long. In fact, it’s as long as the existence of  Republic Act No. 9189 or the Overseas Absentee Voting Law, which provides for a system for Filipino citizens working or residing outside the Philippines to vote in a national election.

“But not once,” Garcia said, “have I ever been able to vote while at sea.”

One of the 26,808 seafarers who have registered as overseas absentee voter or OAV, Garcia still remembers how excited he was a decade ago when he learned from an orientation session that seafarers and other overseas workers could now vote even if they were outside the Philippines.

“I bought into that,” he said. “But during elections, there was nothing, no one official who could point us to our options.”

So for this year’s midterm elections, Garcia is hardly optimistic that he and other seafarers who registered can vote since they are at sea three to six months at a time.

The monthlong voting for a total of 737,759 OAVs started on the second week of this month. If every one of them votes, the number is sizable enough to decide the outcome of the May 13 senatorial elections.

But statistics for past elections show that a significant portion of these voters has not been exercising their right to vote. OAV turnout in the 2010 elections was a measly 25.99 percent, or 153,323 out of the 589,830 registered voters.

Registered OAVs vote in national elections in Philippine diplomatic posts abroad during the prescribed period set by the Commission on Elections (Comelec). In some areas where the posts have been closed, postal voting, or casting ballots through the mail, is allowed.

The low voter turnout in the 2010 polls may not have been due to lack of interest. As Garcia had said, no one in or out of government had taken the time to explain to him and many other OAVs the how, why, what, and where of casting votes abroad.

Garcia registered as an absentee voter while applying to become a member of the Associated Marine Officer’s And Seamen’s Union of the Philippines (AMOSUP).

The Comelec-OAV office had set up registration desks at the offices of AMOSUP and Philippine Transmarine Carriers Inc., a crew management company based in Makati.

Setting up more registration centers is one of the initiatives cooked up by Comelec and migrants advocacy groups in the hope of increasing listup turnout not only among seafarers but among all overseas Filipinos. 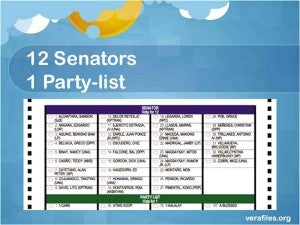 OVERSEAS absentee voting is limited to the senatorial candidates and one party-list representative.

But the convenience offered by more registration centers may not be enough incentive for overseas Filipinos to enlist. The OAV Law requires those who register to sign an affidavit of intent to return back to the Philippines within three years or face up to a year in jail.

This provision has been pointed out in a congressional inquiry initiated by then Sen. Rodolfo Biazon in December 2004 as one of the reasons for low registration turnout: only 364,187 registrants in 2004 and even fewer, 132,820, in 2007.

Last February, an amended OAV Law was approved by Congress and is awaiting President Benigno Aquino III’s signature. The amended version removes the provision on mandatory signing of an affidavit to return back to the Philippines.

But registration is only the first half of the process. The second, and more challenging half, is for these overseas voters to actually cast their ballots during the voting period.

Last December, the Comelec announced the delisting of 238,455 overseas Filipino voters who have failed to vote twice in the national elections. The announcement was made through the OAV website, Philippine media outlets and a memorandum to the DFA’s diplomatic posts.

GFDC representatives from the United States argued that apart from the difficulties that overseas Filipinos encounter in having to travel all the way to the nearest Philippine consular office just to register and then to vote, the provision of the law Comelec relied on to delist the overseas voters was simply discretionary, not mandatory.

On March 5, the Comelec reconsidered its decision and voted unanimously to reinstate the 238,455 overseas Filipino voters it ordered delisted in December.

Comelec Resolution No. 9654 extended the period of filing of the manifestation of intent to vote so those delisted can participate in the May 13 elections. This means that those who failed to vote in the last two elections can cast their ballots this year and will be reinstated in the Comelec’s list of OAV voters.

The resolution also provides for the “immediate publication of this resolution in two newspapers of general circulation.”  Two major Philippine publications have since printed the resolution, but very few of the registered OAVs are likely to have read or even heard of the good news.

The proposed amendment to the OAV Law could increase voter turnout. It provides for registration and voting using mail, whether postal or electronic, fax, and other secure online systems. This is a welcome transition to the digital age and does away with the old system where voting beyond the confines of the nearest Philippine Embassy and Consulate is the only option available to OAVs.

But the law and Comelec still need to address other problems.

A financial analyst in Singapore was so surprised to find out that the Philippine Embassy would not release her new passport unless she registered as an OAV.

“I said I had no plans of voting in Singapore, but the woman at the counter said they couldn’t release my new passport if I did not register, so I filled out the registration form and took the necessary biometric encoding under protest,” she said.

The financial analyst became even more exasperated when she learned she could not vote in the Philippines which she is visiting in May because she is registered in Singapore.

The current voting system allows only for one ballot per registrant. That means that even if an OAV is in the Philippines at the time of the elections, he or she may not vote because her ballot has been sent to the diplomatic post where his or her name is registered as a voter.