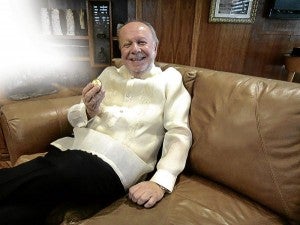 Philippine Ambassador to Portugal Philippe Lhuillier: Finding a way to get Filipino seamen to vote PHOTO BY MICHELLE V. REMO

MANILA, Philippines—Philippine Ambassador to Portugal Philippe Lhuillier has found a way to reach Filipino seafarers and allow them to vote ahead of the May 13 elections.

“We call it akyat-barko,” Lhuillier told reporters in Manila.

“It was just one of the crazy ideas I had. Because why would they come to the embassy to vote? They have no time. Their ship arrives at 7 a.m., they leave at 6 p.m. And of course, they want to go out there [to see the city],” he said.

Under the Overseas Absentee Voting (OAV) scheme approved by the Commission on Elections, Lhuillier said he and two other staff boarded ships at the Lisbon port to look for Filipinos qualified to vote and register them.

The embassy team then went back to the port this week to see if returning ships carried Filipinos who had signed up for the OAV. Twelve vessels that have docked in Lisbon since Monday carried 500 of the 6,500 Filipino seafarers who had registered earlier. They then cast their ballots with the team.

“They were only so happy to vote,” said a visibly delighted Lhuillier, who took up his post in January. He said one sailor had not voted in nearly 18 years.

The figure is much higher than the registered land-based Filipinos in Portugal, with the total OAV registrants just at 323 out of nearly 3,000 Filipinos there.

The Department of Foreign Affairs (DFA) said 988,384 Filipinos overseas had registered for the OAV. As of Thursday, voter turnout among them was 26,463, the DFA said.

Lhuillier said his team would visit at least three ships arriving at the Portuguese capital every day to seek out OAV-registered Filipinos and get them to vote. The OAV will end on May 13 in Philippine missions around the world.

Under the scheme, Filipinos abroad may vote in Philippine missions of their current locations. The system may, however, be difficult for seafarers.

Formerly the country’s envoy to Rome for 11 years, Lhuillier, also among the country’s leading businessmen, said he hoped to “reintroduce” the Philippines to Portugal and vice versa.

“The biggest problem is we don’t know about Portugal except for Fatima,” said Lhuillier, speaking of the famous Portuguese pilgrimage site known for Marian apparitions.

There is “very minimal” trade to speak of between the Philippines and Portugal, he said. Manila just reopened a mission there in 2010 while Lisbon has no consular presence in the Philippines.