But PH to pursue case vs China filed in UN tribunal
By: TJ A. Burgonio - @inquirerdotnet
Philippine Daily Inquirer / 12:10 AM April 26, 2013 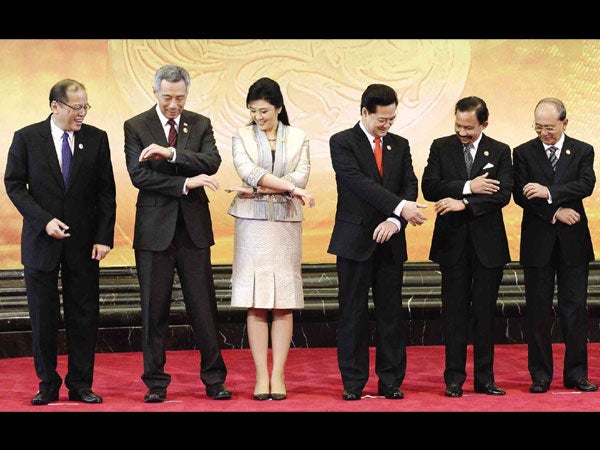 BANDAR SERI BEGAWAN—President Aquino emerged from the Association of Southeast Asian Nations (Asean) summit on Thursday upbeat about the prospects of a maritime code of conduct with China to minimize the risk of conflict in the West Philippine Sea (South China Sea).

But even with an Asean agreement to engage China in talks for good behavior at sea, Aquino has made it clear that Manila is not going to withdraw its arbitration case in the United Nations even if Beijing withdraws its surveillance ships from Philippine territory in the West Philippine Sea.

A code of conduct is intended to prevent conflicting territorial claims in the sea from erupting into violence, but the case the Aquino administration has brought to the UN arbitral tribunal aims to force China to recognize the Philippines’ exclusive economic zone.

Aquino and other Asean leaders adjourned the two-day summit on Thursday with an agreement to engage China in talks for a code of conduct, a complete departure from last year’s summits in Phnom Penh.

After the session at the palatial Prime Minister’s Office (PMO), the Philippine officials came away with the impression that Asean was “definitely united,” Almendras said in a chance interview before the presidential delegation motored to the airport for the flight back to Manila.

“It was a very good meeting. It was very productive,” he said inside the cavernous stone and marble building Brunei’s Sultan Hassanal Bolkiah had ordered built for the annual two-day summit. “You realize that the effectivity of Asean is based on its centrality.”

Bolkiah, chairman of Asean this year, said the region’s leaders looked forward to a “continued engagement” with China in implementing the 2002 Declaration of Conduct of Parties in the South China Sea (DOC) between Asean and China.

“We tasked our ministers to continue to work actively with China on the way forward for the early conclusion of a code of conduct in the South China Sea on the basis of consensus,” he said in a press conference, reading from a prepared statement.

Asean hoped to forge a binding code of conduct with China to replace the DOC, which has failed to stop clashes in the disputed waters. China has balked at this, arguing the time is not ripe yet and preferring to deal with individual claimants.

The Philippines, Brunei, Malaysia and Vietnam, as well as China and Taiwan have overlapping claims over islands, atolls and islets in the West Philippine Sea believed to be sitting atop vast oil and gas reserves.

The sea is also home to sea lanes through which a third of global trade passes every year.

“The consensus is that Asean would move forward and try to work with China to make it happen,” Del Rosario said in an interview.

Thailand, which has the role of Asean coordinator with China, proposed a meeting among Asean foreign ministers ahead of an Asean-China meeting expected in August to forge solidarity on the code of conduct, Del Rosario said.

“I think there is a meeting between Asean and China sometime in the second half [of the year]. What Thailand has done is that they called a meeting prior to that among Asean foreign ministers so we can establish solidarity in approaching that problem,” Del Rosario said.

According to Del Rosario, the Asean leaders tackled the “expeditious conclusion of the code of conduct,” and had a discussion “on getting everyone in accord with the full implementation of the DOC.”

Asean endured unprecedented infighting last year as the Philippines and Vietnam failed to persuade the bloc to send a united message of concern to China.

Cambodia, a close China ally that held the rotating chair of Asean in 2012, blocked the efforts of the Philippines and Vietnam.

Philippine President Benigno Aquino said after Wednesday’s dinner he was pleased Brunei’s Sultan Hassanal Bolkiah had made the South China Sea issue a top priority at the summit, and that Asean had rebuilt some unity on the issue.

“Everybody is interested in having a peaceful resolution and also in voicing … concern that there have been increasing disputes,” Aquino told reporters.

“We should really be thankful that the whole of the Asean is willing to discuss this instead of putting it on the backburner.”

In last year’s meetings in Phnom Penh, Cambodian Prime Minister Hun Sen reportedly stalled moves by the leaders of the claimant-nations to get the conflict mentioned in a postsummit joint statement.

Aquino rebuked Hun Sen in the second meeting in Phnom Penh last year for claiming that the regional bloc had reached a consensus against internationalizing the issue.

Analysts said Asean’s calls for China to agree on a legally binding code of conduct for the sea would likely lead nowhere.

Asean and China first agreed to work on a code in 2002, but the Asian economic superpower has since refused to discuss it further.

“China was never enthusiastic about a code of conduct, as it does not want to sign an agreement that will constrain its sovereignty-building activities,” Ian Storey, a senior fellow at the Institute of Southeast Asian Studies, said.

But Aquino said he was happy that Asean leaders had at least united in trying to ensure the disputes over territory in the sea did not “become bloody.”

“So there is unity of purpose and one can always be hopeful that will lead to something more concrete,” he said.

The Philippines and China remain in a standoff at Panatag Shoal (Scarborough Shoal) off Zambales province, with Beijing keeping allegedly armed vessels in the area despite an agreement last June for the two countries to withdraw their ships to ease tensions in the disputed waters.

With China insisting on claiming the area within the Philippines’ exclusive economic zone, Manila brought the dispute to the United Nations last month for arbitration.

On Wednesday, Mr. Aquino told reporters that the Philippines will not drop its case against China even if Beijing pulls out its surveillance ships from Panatag Shoal.

“That can’t be withdrawn,” Mr. Aquino said. Any deal for withdrawal will be susceptible to a “change in mood” later on, he said.

The President stressed that Manila filed the case in the United Nations to clarify its borders with China under the Unclos.

“What we’re after here is clarification for both parties,” he said. “I don’t want to heighten the tension by demanding that they respond to this. This is a process. We have to go to all the avenues open for all of us to finally come up with something that is definitive: what are your entitlements, what are your obligations.”

Manila filed the case, asking the United Nations to compel Beijing to respect the Philippines’ rights to exclusively explore and exploit resources within its exclusive economic zone and continental shelf, as provided for in the Unclos.

The Philippines ratified the Unclos in 1984 and China in 1996. But the two countries have conflicting interpretations of the provisions, especially on the scope of the 22-kilometer exclusive economic zone.—With a report from AFP