Aquino to push for code of conduct in Asean meet 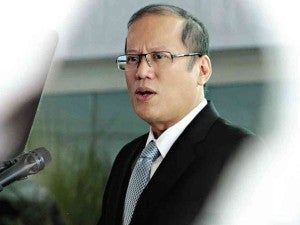 BANDAR SERI BEGAWAN—The two-day summit of the Association of Southeast Asian Nations (Asean) opened here Wednesday night with the Philippines looking to Brunei to push for an early conclusion of talks with China on a code of conduct in the South China Sea.

The summit chairman, Sultan of Brunei Haji Hassanal Bolkiah, opened the summit by hosting a dinner for the nine other Asean leaders, except for Malaysian Prime Minister Najib Razak who sent a representative, at the spanking new Prime Minister’s Office.

Pushing for code of conduct

President Aquino, who arrived Wednesday night for the opening, said he would push again for the code of conduct to minimize the risk of conflict in the South China Sea, which the Philippines refers to as West Philippine Sea.

In a departure statement in Manila, Aquino said that under the sultan’s leadership, “we have full confidence we can move forward on equal terms on this issue.”

Today, the leaders will attend a Retreat Session, whose agenda is expected to include overlapping territorial claims over the South China Sea between Asean and China, and the tension in the Korean Peninsula.

The Philippines would push for the full implementation of the Declaration of the Conduct of Parties in the South China Sea, and for the early conclusion of a “substantive and legally binding” code of conduct, foreign officials had said.

Ambassador Elizabeth Buensuceso, Philippine permanent representative to Asean, indicated that Manila was looking to Bandar Seri Begawan to take the lead in pressing for negotiations on a code of conduct with Beijing.

“In this summit, this issue will be tackled. I think the chairmanship of Brunei would like to be able to come up with a statement that is constructive toward maintaining peace and stability in the region,” Buensuceso told Radio TV Malacañang.

Since the format of the summit is informal, and the leaders could raise any issue, she added: “We’re not going to rest on our laurels. In this summit we will urge the Asean-member countries to be forward-looking.”

Ochoa agreed that Brunei’s goal would be to push for the code of conduct during its chairmanship of Asean.

“They (Brunei) hope that something would happen to the code of conduct before the end of the year,” he said. “So far there’s no formal consensus yet. Hopefully, Asean will agree among themselves and China is next.”

In the Retreat Session, the Asean leaders would exchange views on regional and international issues, and discuss the Asean community in 2015, its central role and regional architecture, and its future direction.

The Asean leaders would call for an “early adoption” of the code of conduct with Beijing, according to a draft statement to be issued after the summit obtained by The Associated Press.

A code of conduct has been on the agenda of Asean for the last 10 years. China has balked at this, claiming the time wasn’t ripe for it, and preferring to deal with individual claimants.

Asean countries have already crafted the “elements” of the code of conduct, but it was another matter to convince Beijing to sit down at the negotiating table.

South China Sea is being claimed whole by China, and in parts by the Philippines, Brunei, Malaysia and Vietnam, as well as Taiwan.

The Philippines has challenged China’s claim over most of the South China Sea by filing a notification and statement of claim with the United Nations.

Meantime, the Philippines has to deal with the presence of three Chinese surveillance ships in Scarborough Shoal (Panatag Shoal) despite an agreement by both countries to withdraw from there following a tense standoff in April last year.

Filipino officials view the continuing incursion as a violation of the code of conduct, a 2002 nonaggression pact that has failed to stop clashes in the South China Sea.

The government allotted P7 million for President Aquino’s attendance at the summit in Brunei. He will spend less than 24 hours in Bandar Seri Begawan, accompanied by a 51-member delegation, Executive Secretary Paquito Ochoa Jr. said.

The cost covers the charter lease, accommodation, transportation, food and equipment, among others, for Aquino and his delegation.