MANILA, Philippines – “It was an attack on humanity, not just on the US.”

This was how Filipino American Arland Macasieb, professional triathlete and running coach, described to Radyo Inquirer 990AM the tragedy that hit the 117th Boston Marathon (Tuesday in Manila). 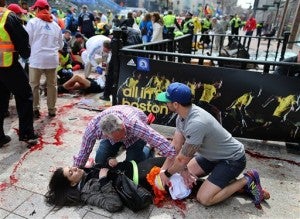 Two explosions ripped through Boylston Street, killing three individuals, including an eight-year-old boy, while over a hundred more are being treated for injuries.

“The Boston Marathon is an international field wherein you’ve got the best runners from all over the world. They not only harmed the Americans. It was an attack on humanity, not just on the US,” said Macasieb who finished the marathon roughly an hour before the explosions occurred.

Foreign Affairs spokesperson Assistant Secretary Raul Hernandez said that around 10 Filipinos participated in the marathon, citing reports from their officials in the US but Macasieb said that he counted at least 12 Filipino runners.

“There’s 12 [but] I think there’s more—around 15 [runners], maybe. The ones I know personally, they’re all safe but the [DFA’s] list has names that I’m not aware of,” said the 37-year-old triathlete.

Macasieb had already left the marathon when the explosion shook the sidelines of the marathon but said that his friend Rolando Ocampo reached the finish line roughly 10 minutes before the blasts.

He said that Ocampo mentioned how at first they did not realize that the explosions were from bombs going off.

“Thank God I was already on a train going back to my friend’s apartment when the explosion happened. I only saw it on TV… [and the] explosion sounded like a big firework,” Macasieb said.

“We turned on the news and we saw all the chaos. This whole bombing is completely unexpected but because it’s an outdoor event, it’s vulnerable,” he added.

The Boston Marathon covers roughly 42 kilometers of open road, something which made it “vulnerable” to such attacks, he said.

“You cannot secure 42 kilometers of open road. Security is as tight as it can be but it’s not like a stadium or a shopping mall where you can run people through metal detectors,” he lamented.

Unfazed by the incident, the Manila-based triathlete said he was hopeful that the explosion will not deter runners from competing.

The London Marathon is scheduled for Sunday and reports said that security for the next international sports event is being reviewed in the wake of the Boston blasts.

“It’s not an attack on running. I’m praying that it’s just one of those things that happen once. I hope this is the first and only time it happens,” said Macasieb.

“We shouldn’t live in fear… I hope this doesn’t deter people from running,” he said.