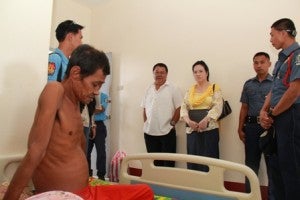 One of the alleged member of the Sulu Royal Security Forces, Haxbil Jailani, suffers from kidney problem. Photo from PAO

MANILA, Philippines–The Public Attorney’s Office (PAO) on Tuesday asked the Tawi-Tawi Regional Trial Court to transfer two of the 38 suspected members of the Sulu’s Royal Security Forces to a medical hospital for treatment of serious illness.

In an urgent motion, PAO through its chief, Persida Rueda-Acosta, sought the transfer of Haxbil Jailani and Ruben Unuk from the Naval Station in Batobato, Panglima Sugala, Tawi-Tawi to Zamboanga Medical Center.

“It is most respectfully prayed that the two accused be allowed to be brought out of the detention facilities and transported to Zamboanga City Medical Center for the urgent diagnostic examination, hospitalization and treatment of their illnesses or surgical intervention if necessary under proper escort,” Acosta said.

To relieve the government the burden of providing security, PAO asked the court to allow the two to post P3,000 bail per charge for their temporary liberty.

The two, together with 36 others are facing charges for violation of Article 118 of the Revised Penal Code for Inciting to War and giving motives for reprisals, Illegal Possession of Firearms and violation of the election gun ban. The prosecutors recommended over P400,000 bail for each charge.

Dr. Erwin Erfe from PAO examined both accused. His findings were confirmed by Dr. Sukarno Asri of the Provincial Health Office who recommended their transfer to a tertiary hospital because of lack of operating room in the naval detention.

The 38 were the first batch of alleged supporters of the Sultanate of Sulu in connection with their alleged intrusion in Sabah.

They were intercepted in three separate incidents off the seas of Tawi-Tawi by the Philippine Navy and Philippine Coast Guard last month.
Government had earlier announced that several of Kiram’s followers who are part of the ‘Sabah expedition’ were sailing back to Tawi-Tawi to escape Malaysian forces.