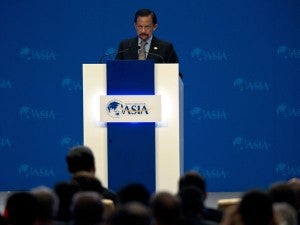 A 21-gun salute boomed in the distance as the President and Sultan stood on a carpeted platform at Malacañang while the anthems of both countries were played. They later trooped the line.

Aquino introduced Bolkiah to a line of welcoming Cabinet officials, while Bolkiah himself introduced the President to members of his official delegation before walking inside the Palace for the state luncheon at the Rizal Hall.

The visit comes a week before the 22nd summit of the Association of Southeast Asian Nations in Bandar Seri Bagawan, chaired by Brunei, on April 24 and 25.

Bolkiah is set to depart at around 3 p.m. Tuesday.