PancitBacon, anyone? It’s at SF Bay Area’s ‘What the Fork’ 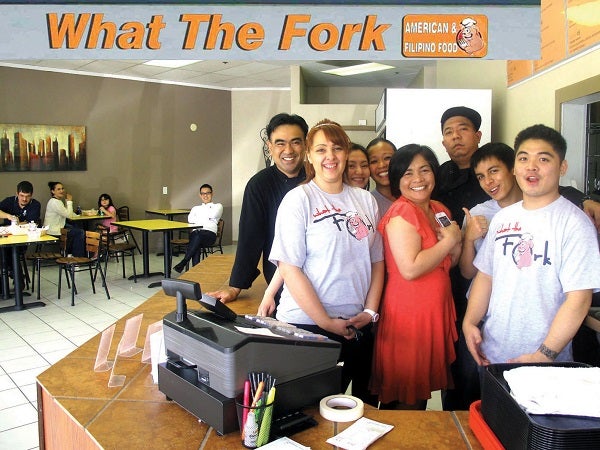 The staff at fresh-cooked “fast food” joint, What the Fork.

He says Filipinos can’t get enough of pancit, while Americans love bacon. Thus his creation, PancitBacon. He goes on to say that wrap fans are rapping over BBQ Wrap–Filipino-style barbecue lettuce, and tomatoes drizzled with the chef’s signature sauce and wrapped in a tortilla.

These are just a couple of the mouth-watering dishes at What the Fork, the Bay Area’s newest showcase of Filipino American cuisine, which opened this week in Antioch, Contra Costa County, where Filipinos make up more than half of the total Asian population.  It is the second outlet of the modest, family-oriented food enterprise owned by the Calalo couple, Sunthie and Marites.

“Dampa Restaurant, which we opened back in August 2010, is an all-Filipino dining place, being the first Pinoy restaurant and catering service in Castro Valley,” Sunthie tells FilAm Star.  “What the Fork, on the other hand, is, I believe, the first and only source of food, at least here in Antioch, that celebrates classic Filipino flavors but packaged in the American way.”

It’s Filipino-American fusion then, hands down.  For what else do you call Adobomix-with-Fries Sandwich, pulled adobo pork and chicken sandwich with fries on the side?  Or Cinowich, simply a sandwich made of tender and juicy tocino, eggs and fresh tomatoes?  Or Baconsilog of the Filipino “silog” line, but featuring American bacon as the side meat next to the “sinangag” and eggs?

Of course, traditional Filipino fare –the likes of crispy pata, lumpia and, yes, the omnipresent “silogs”–cannot be missed at What the Fork, alongside Chef Sunthie’s fried chicken and bihon-canton pancit.

The new place is certainly not big, seating just about 25, says Marites.  “But it should attract plenty of people on the go who only have time for quick but filling bites, or to pick up phoned-in orders before heading home or back to work. What the Fork really is a fast-food place, minus the pre-cooked food on display– everything is freshly and quickly prepared and cooked only upon order.”