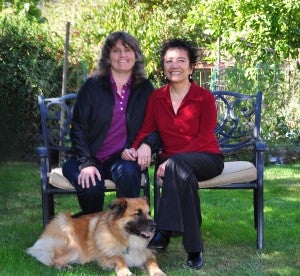 Ces Rosales (right) and Sue Ferrera, her partner of 28 years, were in the forefront of the No on 8 Campaign in Berkeley, California.

SAN FRANCISCO—From the way U.S. news media are covering two same-sex marriage cases in the U.S. Supreme Court and from statements of certain high court justices, it seems Jaime Geaga and his partner of 30 years, Gary Rhodes, “are getting closer to achieving equal rights as a same-sex couple,” Geaga, a Los Angeles resident, beams.

Since the last week of March, the world has been riveted on two marriage equality cases before the U.S. Supreme Court that could overturn California’s Proposition 8, which bans same sex-marriage, and the Defense of Marriage Act (DOMA) that deprives married same-sex couples of federal benefits enjoyed by heterosexual spouses.

The Supreme Court is scheduled to announce its decision in June, an event that the Lesbian, Gay, Bisexual and Transgender (LGBT) members of the Filipino community will be watching closely.

“For two days in late March, I kept abreast of the international coverage by tuning in to CNN, MSNBC, BBC World, Al Jazeera, and PBS newscasts from Berlin and France,” says Geaga, a fundraiser for the Vote No on Proposition 8 campaign and  volunteer at the LGBT Center in L.A. He also founded the Filipino Task Force on AIDS in 1987 that served Filipinos with HIV and AIDS in San Francisco for 16 years.

Recent polls indicated a momentous shift in public opinion since Proposition 8 was passed in California in 2008.  The Reuters/Ipsos Poll reported that 63 percent of Americans are now in favor of gay marriage or civil unions.  The ABC News and Washington Post poll found that a staggering number of young people, 81 percent among ages 18-29, support same-sex marriage, while 58 percent of adults also support marriage equality. 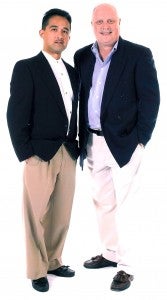 Jaime Geaga and Gary Rhodes, his partner of 30 years, worked on fundraisers for No on 8 Campaign

Rodel Rodis, a San Francisco attorney and president of U.S. Pinoys for Good Governance, was not surprised by the favorable polls.  He says, “These figures show that it is just a matter of time before the country fully embraces the concept.  There are Filipino community leaders and business owners in the Bay Area who are openly gay.  My sons have many friends who are openly gay, so this is not even an issue for their generation.  I’m hopeful that the Supreme Court will declare both Proposition 8 and DOMA unconstitutional.”

Hope is something that Pat Yadao and Liz Ermitano have held on to tightly since they started a relationship 15 years ago.  Both surgical nurses at the Mills-Peninsula Medical Center in Burlingame, they’ve joined missions to the Philippines that provide free medicals services.

Yadao comes from a liberal family and did not have any problems coming out.  Ermitano’s parents and nine older siblings were more conservative and took some time getting to know Pat and the couple’s commitment to each other.  When Ermitano finally told her parents that she had decided to be with Yadao, her father looked her in the eye and said, much to her surprise, “You’re an adult, if you think this is what you want in your life, by all means, I support you.”

On November 4, 2008, a sunny autumn day in San Francisco, Yadao and Ermitano got married at the San Francisco City Hall, a date that they both described as historical.  Yadao notes, “Barack Obama was elected president on that day and it was the last day that same-sex marriage was legal in California before Proposition 8’s ban was enforced.”  Ermitano’s 85-year-old widowed mother was by their side as they said their vows, also witnessed by several members of their families and friends, while activists for same-sex marriage were demonstrating outside the building, adding to the festive atmosphere.

As more and more people from prominent sectors of U.S. society–from President Obama and members of Congress to heads of corporations to artists, entertainers and athletes–are now openly expressing their support for same-sex marriage, Filipino Americans are lamenting how homophobia is still alive and well in the Philippines.

Bino Realuyo, a Fil-Am author and blogger for the Huffington post, wrote that a 1991 survey showed that “82 percent of respondents across the Philippines said sexual relations between two adults of the same sex was always wrong…16 years later, the number had hardly changed…”  One of the reasons that Realuyo and many others ascribe for this position is the influence of the Catholic Church. 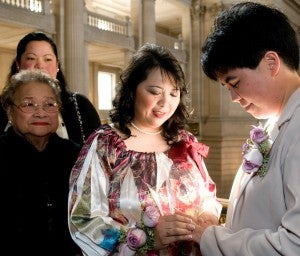 CNN’s March 12, 2010 report on the entry into the Philippine election of Ladlad Party, the world’s only LGBT political party, quoted Caloocan Bishop Deogracias Iniguez, Jr. saying, “Personally, I’m not in favor of the party, because it’s a group that’s of abnormal human persons, according to what we accept as the order that the Creator has made for human persons.”  The Church, however, is not homogeneous in this view as there are rank and file members who are quietly expressing their opposition to this homophobia.

A Northern California Filipino priest, who has been with his religious order for 40 years and ministers to OFWs internationally, says that whenever his parishioners ask him about same-sex marriage they are taken aback by his response that he is for it.

“I use such occasions to raise their consciousness by reminding them that according to the Scriptures, we were all made in the image and likeness of God and therefore that includes people from the LGBT community,” he states.  “Marriage must be available to two persons who love each other and want to proclaim their love to the world,” he adds.

That’s what Ces Rosales, a graphic designer and the Northern California Vice Chair of the Women’s Caucus of the California Democratic Party, did when she married

Sue Ferrera, her partner of 28 years, at a well-attended wedding in 2005 in Canada, which legalized same-sex marriage that year.

Rosales and Ferrera had been on the forefront of the No on 8 Campaign in Berkeley, where they live.  Rosales, who is an elected delegate to the California Democratic Party, believes that the upcoming U.S. Supreme Court decisions will be a milestone in the fight for marriage equality.  “It is a matter of human rights to treat people equally under the law.  Ironically, although we pay taxes that allow benefits to heterosexual couples, we are not able to avail of them,” she says.

When asked how she would feel if the challenges to Proposition 8 and DOMA lost in court, Rosales was sanguine in her response, belying her many years as an activist in the anti-Marcos and women’s movements.  “Whether the naysayers like it or not, we’re here to stay and continue leading our happy lives.  If we don’t get our legal rights this time, we will keep fighting until the LGBT community achieves equality,” Rosales states.

Although the union of Yadao and Ermitano remains valid because it was held before the Proposition 8 ban, the continuing discrimination against the LGBT community does not give them comfort.  They’re still deprived of over a thousand federal benefits because of DOMA, and their marriage is diminished by the persistent legal challenges of Proposition 8 proponents, although the Ninth District Court of Appeals had already declared the measure unconstitutional.

Yadao states, “If anything happens to me, I want Liz to get all the protections and rights entitled to her as my spouse.  When Proposition 8 and DOMA are finally struck down, that will be the happiest day of my life.”