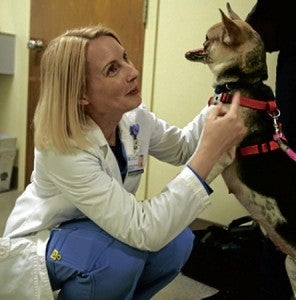 ZAMBOANGA CITY, Philippines—The adage “You reap what you sow” has been proven to be true once more even if the one committing the good deed was just a dog.

Kabang’s good deed—saving the daughter and a niece of her owners from  harm in December 2011 when she blocked the path of a speeding motorcycle—continues to spell good karma for the so-called “asong pinoy” (Filipino dog) or “aspin.”

After beating cancer last year, she is now on the road to full recovery and would soon be sent home from the University of California-Davis, where she underwent maxillofacial surgery on March 27.

During the five-hour surgery undertaken by UC Davis doctors Boaz Arzi, Frank Verstraete, Bill Culp, and Amy Fulton, Kabang’s wound from the loss of her upper snout during the 2011 incident was closed “with skin flaps pulled from the top and sides of her head.”

She has been in the VMTH’s intensive care unit since the surgery.

“Kabang does not appear uncomfortable when people touch her face, which is a great sign that her recovery is progressing successfully. She remains stable in the ICU,” the VMTH said in an April 5  bulletin on Kabang. The bulletin was posted on VMTH website

In fact, Kabang has regained her playfulness, which has worried VMTH doctors a bit as she might “scratch her face and/or remove her sutures.”

She is now also able to eat and drink “without any complications” but will remain in the ICU “until, at least, she has her sutures removed,” the VMTH bulletin added.

In foreseeing her fast recovery from the surgery, the VMTH also said Kabang was no longer taking pain medication and has not been sedated lately because “she doesn’t appear to be in any pain.”

“It appears she is now able to eat pain-free and enjoys her meals. At no time was it necessary to insert a feeding tube,” the VMTH added.

“Her vets describe her as the ideal patient,” Rob Warren, VMTH communications officer, said in the same bulletin. “She’s receptive to everyone, and no matter what we put her through, she wags her tail.”

However, Warren said, Kabang may well have to contend with the fact that she would be spending the rest of her life without her upper snout restored even by prosthetics only.

“Kabang’s upper snout and jaw cannot be replaced with prosthetics,” he said.

Warren said Kabang might have realized early on that there was no way her upper snout could be restored that she has learned to “curl her tongue back into her mouth to scoop food.”

Dr. Anton Maria Lim, Kabang’s personal veterinarian, told the Inquirer by phone that Kabang was coping well with her situation and even the doctors who did the surgery on her “really expressed their amazement over how their patient recuperates fast.”

“She is now very playful, back to her old self, although her body is adjusting to the two stents that were inserted in her nasal openings. Once it’s fully healed, the stents can be removed and that will serve as her permanent opening, like a nose,” Lim said.

Warren said it was not only  the doctors at VMTH who admired the dog.

“As of March 20, Kabang had more than 20,000 ‘likes’ on the Care for Kabang Facebook page and had generated donations from more than 23 countries,” he said.

Lim said many families in the United States have expressed interest to adopt Kabang but “she has to return home.”

“We are really grateful for the overwhelming support they extended to Kabang, but she has to come home soon,” Lim said, adding that by mid-May, the dog could already be returned to her owners, the Bunggal family here.

With a report from Allan Nawal, Inquirer Mindanao