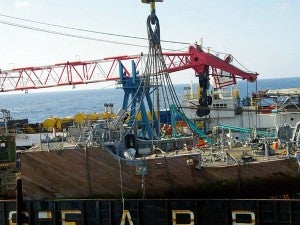 In this photo taken on March 30, 2013, and released by the Philippine Coast Guard on Monday, April 1, 2013, the stern of the USS Guardian, a U.S. Navy minesweeper, is transferred to another ship after being lifted out of the water at the Tubbataha Reef, a World Heritage site, in the Tubbataha National Marine Park, southwest of the Philippines. Tubbataha park superintendent Angelique Songco said the fine for damaging the protected coral reef would be about 24,000 pesos ($600) per square meter, so the U.S. could be facing a fine of more than $2 million. AP FILE PHOTO

MANILA, Philippines—The Philippines will ask the United States to pay P58 million ($1.4 million) in compensation for damage caused by a US warship to the Tubbataha Reef, the manager of the protected reef said Saturday.

The amount is based on studies by Philippine agencies including the coast guard that found the USS Guardian damaged at least 2,345 square meters (25,240 square feet) of the reef, said park superintendent Angelique Songco.

“[The fine of] $1.4 million is but a slap on the wrist, as the salvage operation has been estimated to cost close to $45 million,” she said.

Songco said a letter requesting compensation would be sent to the US embassy next week, stressing this is the amount required by a law passed to protect the reef, a Unesco World Heritage site in a remote area of the Sulu Sea.

“We don’t want to be dishonest. It is just a simple process: measure it correctly and then they pay. That is all. It is very straightforward,” she said.

A team of divers and researchers from the TMO and the World Wide Fund for Nature (WWF)-Philippines just finished assessing the full damage of the January 17 grounding of the USS Guardian, which got stuck in the World Heritage Site located in middle of the Sulu Sea.

Salvors finished extricating the ship, which had to be dismantled piece by piece, on March 30.

According to the report of the assessment team, “results indicate the damaged area spans 2,345.67 square meters – smaller than the 4,000 square meters originally estimated by an American team,” WWF-Philippines said in a statement.

WWF-Philippines vice-chair and CEO Jose Ma. Lorenzo Tan said the fine to be paid to TMO should help it build “a significant endowment fund to sustain its operations through the years.”

“The basic issue here is not tourism. It is food security. This fresh infusion of funds will allow TMO to concentrate on putting the money to good use – from building a better Ranger Station to upgrading their capacity to manage the country’s most productive coral reef,” he said.

It took the salvage teams until March 29 to remove the last of the 223-foot (68-meter) USS Guardian, which had to be cut into pieces so it could be lifted clear without damaging the reef further.

The incident stirred nationalist anger with demands that the United States pay a large amount of compensation for damaging the reef, which is world renowned for its rich marine life.

But Songco said they would only ask for the required amount based on the affected area.

“I am not worried about criticism (for the small amount). We are not trying to put one over them and we hope they will do the same with us,” she said.

She said the last of the salvage ships had left Tubbataha but a team of US Navy divers and a US vessel remained in the area, assessing the damage.

The United States has apologized for the mishap and said it would cooperate in addressing the damage.

The commanding officer and three crew of the USS Guardian were relieved of their duties over the grounding, the US Navy announced earlier this week.

The Tubbataha Reef Natural Park lies at the center of the Sulu Sea. It protects almost 100,000 hectares of high-quality marine habitats containing three atolls and a large area of deep sea.

Home to whales, dolphins, sharks, turtles and Napoleon wrasse, the park supports more than 350 species of coral and almost 500 species of fish. For this, it has been declared a World Heritage Site by the United Nations Educational, Scientific, and Cultural Organization.

The reserve also protects one of the few remaining colonies of breeding seabirds in the region, according to Unesco.