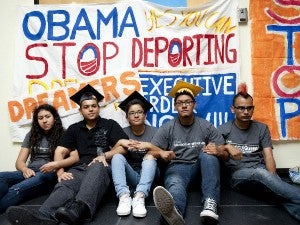 From left, Myisha Areloano, Adrian James, Jahel Campos, David Vuenrostro, and Antonio Cabrera camp outside of the Obama Campaign Headquarters in Culver City, Calif. in protest of President Obama’s immigration policies and in hopes of getting him to pass an executive order to halt discretionary deportation on Friday, June 16, 2012. AP FILE PHOTO

WASHINGTON—Sweeping immigration legislation taking shape in the Senate will aim to overhaul the nation’s agriculture worker program to create a steady supply of labor for farmers and growers, who rely more than any other industry on workers who have come to the country illegally.

Farm workers already here would get a speedier path to legal status than other immigrants in the country illegally, and a likely new visa program would make it easier for foreign workers to come to the U.S. Policymakers aim to install such workers in place of the half or more of the US farm labor workforce estimated to be in the country illegally.

Negotiators have been working to finalize an agreement in time for the measure to be included in bipartisan immigration reform legislation expected to be released next week, but disagreements on wages and numbers of visas are proving tough to solve.

Labor groups are accusing growers of pushing to lower farmworkers’ wages, while growers dispute that and say they want to pay a fair wage. Meanwhile, labor is resisting growers’ attempts to increase the potential numbers of new workers who would come in, as growers argue their industry’s viability depends on a strong new labor supply.

The issue has gotten little public attention in an immigration debate focused on securing the border, creating a path to citizenship for the 11 million immigrants living in the country illegally, and designing a new visa program for low-skilled workers outside of agriculture. But for states from California to Georgia to Florida with booming agriculture industries, it’s a critical part of the puzzle.

At least 50 percent and as much as 70 or 80 percent of the nation’s farm workers arrived illegally, according to labor and industry estimates. Growers say they need a better way to hire labor legally, and advocates say workers can be exploited and need better protections and a way to earn permanent residence.

“One thing that we know is that there’s not an industry that will benefit more from a new immigration program than agriculture,” said Giev Kashkooli, United Farm Workers vice president. “The problem is industry needs people who are both willing and able to do the work. And it’s difficult work.”

The reason agriculture uses so much illegal labor has to do with the need for workers, but also the inadequacy of current immigration programs. There is a 10-month visa program for farm workers, called the H2A visa, but growers argue it’s so hard to use that once they’ve completed the paperwork whatever crop they needed picked may well have withered.

There were about 55,000 H2A visas issued in 2011, representing a small percentage of the nation’s approximately 2 million farm workers.

Part of the solution, growers and unions say, is to create a more permanent agricultural workforce. Senators would likely accomplish this by giving a new “blue card” visa granting legal status to farm workers who’ve worked in the industry for at least two years and intend to remain in it for at least five years more.

At that point, potentially, these workers could become eligible for green cards, which allow permanent residency and eventual citizenship — faster than the 10-year path to a green card that other immigrants in the country illegally are expected to face under the Senate immigration bill.

Separately, growers are pushing to replace the H2A visa program with an entirely new program with visas offering multiyear stays. But there is disagreement over how many of these visas would be offered and how much money workers would make — the same issues that hung up a deal between the U.S. Chamber of Commerce, the influential pro-business lobbying group, and the AFL-CIO labor federation over nonagricultural low-skilled workers before a resolution was reached over the weekend.

The UFW contends that growers are trying to push farm workers below their current average wage of $10.80 an hour, but growers say that wage is skewed by a small number of high earners and that most farm workers make less. In light of the dispute, the UFW has begun to argue that a new visa program may not be necessary at all.

The two-pronged structure of the emerging deal is similar to legislation called AgJobs negotiated in years past that never became law. Because of that history, the agriculture issue is being handled differently from other parts of the Senate immigration bill. It’s being negotiated by four senators — Democrats Dianne Feinstein of California and Michael Bennet of Colorado, and Republicans Orrin Hatch of Utah and Marco Rubio of Florida — only two of whom, Rubio and Bennet, are part of the so-called Gang of Eight senators writing the overall bill.

All involved hope for a resolution of an issue that has been in need of one for years, ever since the last major immigration overhaul, in 1986, failed to establish a workable visa program for farmworkers and others.

“We made our bed and have been lying in it ever since so this is a chance to get it right and not repeat those failures,” said Craig J. Regelbrugge, co-chair of the Agriculture Coalition for Immigration Reform.