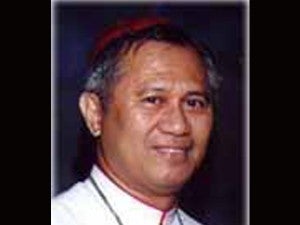 MANILA, Philippines—The Catholic Bishops Conference of the Philippines (CBCP) assured the group of Sulu Sultan Jamalul Kiram III, on Monday, that it would bring the Sabah issue, particularly the reports of human rights violations against Filipinos there, to the Vatican.

“I believe there are agencies in Rome that can be of service in this regard,” CBCP president Jose Palma said in an interview shortly after his meeting with Kiram at the CBCP headquarters in Manila.

The titular head of the Sultanate of Sulu, who had ordered 200 of his followers to occupy a village in Sabah to assert their ancestral land claim to the resource-rich region, met with CBCP president Cebu Archbishop Jose Palma Monday afternoon.

Kiram said that this was the first time he sought audience with the CBCP.

Volunteers Against Crime and Corruption (VACC) founding chairman Dante Jimenez and Gausbaug Coalition for Peace and Humanitarian Resolution of Sabah president Dr. Abdurahman Amin also came with the Kirams. Amin reportedly brokered the meeting, which lasted for about half an hour,

Palma was leaving for Vatican Monday night to attend a meeting on the International Eucharistic Congress.

“The other reason why I’m going there is because of invitation of the German bishops and to attend some seminars. These [occasions] are opportunity to bring the concerns of our country and sisters and brothers down south,” he told reporters.

Asked about what actually transpired during the meeting, Palma said: “Basically it’s like brothers going to brothers, saying that there is a bond between us and that’s the bond that unites people who search for peace. As we say, there is Christian and Muslim way of searching for peace especially of course in the situation in Sabah.”

Kiram’s group handed Palma documents, including the Sultanate’s claim to Sabah and reports of human rights abuses against Filipinos.

“I will read the papers but eventually I will reflect and discern. I also promise to seek the advice of people who are more learned and who know the better ways of the governance,” Palma said when asked what he intended to do after the meeting.

Palma stressed that his meeting with Kiram’s group went beyond religion.

“This is about sisters and brothers, humanity and of course embracing different religions, but I think bonded by search for peace and harmony and the longing to live in love and enjoy the bounty of the earth without fear of attack and many other dangers to their lives,” he explained.

Palma said he did not promise really much to the Kirams.

“They were hoping that I’m able to find a way as a bishop but I haven’t promised really much except that I will seek the advice of people who I believe can help in this situation,” he said.

Palma said he also intended to bring the matter to the CBCP permanent council for discernment.

“We will see whether certain actions could be done,” he said.

In a separate press conference after the meeting, Princess Jaycel said they would submit to the CBCP evidence, including videos showing atrocities against Filipinos in Sabah.

“Archbishop Palma assured us that he will bring this to the attention of the Vatican…I think the meeting today with him is a breakthrough in strengthening our Christian and Muslim solidarity,” Saycon said.

“Archbishop Palma is attending a very timely meeting where he promised to bring this matter to any council in Rome,” Jimenez said, adding that they were hopeful that the matter would reach the attention of the new pope.

Princess Jaycel Kiram and Saycon both said that they were still hoping for a dialogue with the Malaysian and Philippine governments.

“From the very beginning, that was our appeal with them, we only want a dialogue. If they really want this issue to be resolved peacefully, prove it. We’ve always been saying that our lines are open and we are very much willing to talk to settle this peacefully once and for all,” she said.

“Why is it so hard for these people to understand that dialogue is better than war…we still want to talk,” said Saycon.

Sixty of Kiram’s followers have reportedly died in the Malaysian government’s assault on the Sabah intruders. Kiram’s brother, Agbimuddin Kiram, who has been leading the sultanate’s followers in their occupation of a Sabah village, is still being hunted by Malaysia’s security troops.