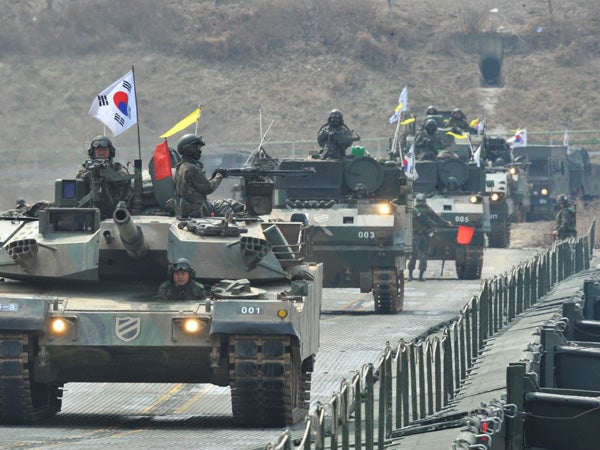 South Korean K-1 tanks move over a temporary bridge during a river-crossing military drill in Hwacheon near the border with North Korea on April 1, 2013. AFP

MANILA, Philippines—It continues to be “business as usual” in South Korea despite a declaration of war by North Korea, but the Philippines has readied a contingency plan for its nationals in case the situation worsens, according to the Department of Foreign Affairs (DFA).

Assistant Secretary Raul Hernandez, the DFA spokesman, said the Philippine Embassy in Seoul had long put in place a step-by-step plan to protect the 40,000 or so Filipinos on the Korean Peninsula in the event tensions between North and South exploded.

For now, he said the embassy has started reminding Filipinos to be vigilant and keep abreast of developments through various media.

“For now, the reports from our embassy are that it is business as usual and life proceeds normally in South Korea. But our embassy is ready for any eventuality and that’s why it has asked our people to be alert and be ready if there is a need to upgrade the alert levels,” said Hernandez in a press briefing on Monday.

“What I can say is that all things that should be prepared have been prepared and all the embassy has to do is to make sure that the triggers are there in order,” he added.

Malacañang said the government would consider all options should hostilities erupt, including flying 40,000 Filipinos out of South Korea by commercial vessels.

“One of the options is to employ commercial vessels. You have seen that in the case of our evacuations in Libya, Syria and also earlier in Lebanon,” deputy presidential spokesperson Abigail Valte said. She deferred to foreign affairs officials for the “finer details.”

Senator Loren Legarda, chairman of the Senate foreign relations committee, said she welcomed the activation by the DFA of contingency plans for Filipinos.

“I hope that the appropriate means to deliver them to safety should the situation arise are available.  We cannot wait for the situation to worsen before the details of our contingency plan are firmed up — from activation of emergency area coordinators, conducting resource inventory, designating holding areas, and identification of safe evacuation routes,” Legarda stressed.

“The uncertainties and dangers exist.  All these could lead to regional instability and erode the progress realized by countries in the region, including the Philippines.  It is hoped that restraint and greater sense of responsibility to regional and world peace will reign over rising tensions in the region,” she said.

The Department of Labor, meanwhile, said that as of Monday, it saw no need to impose a deployment ban on Filipinos going to South Korea.

“There is no deployment ban and as of now we see no serious problem,” Labor Secretary Rosalinda Baldoz said, adding that the government would continue to deploy highly skilled overseas Filipino workers (OFWs) to South Korea.

Quoting Philippine labor officials in South Korea, Baldoz said Filipino communities there have remained calm despite the growing tension in the area brought by the declaration of war by North Korea.

But she said Filipinos have been advised to be always prepared in case of evacuation.

Currently, the embassy is at alert level 1 – the lowest of four levels – which calls for heightened vigilance by Filipinos of the security situation on the Korean Peninsula. This alert level was raised in 2010 and 2011 amid similar tensions between Seoul and Pyongyang.

Under this alert, the embassy closely monitors the situation in coordination with South Korean authorities, US forces and the United Nations command in the country.

In the event of an escalation, Hernandez said, the embassy would determine the next alert level to be raised: Level 2 which restricts the movements of Filipinos; level 3, which means a need to relocate from areas at risk, and level 4, which initiates mandatory evacuation.

The DFA has identified the cities of Daegu and Gimhae in the southern part of South Korea as rendezvous points for Filipinos in the event mandatory repatriation is placed in effect. There, Philippine consular officers will arrange for their flights home.

Hernandez said this protocol had long been in place and was constantly being reviewed and updated in the face of the new threats.

“The embassy is also in close contact with Filipino community leaders as part of efforts to refine the contingency plan, including firming up evacuation sites in [South Korea],” said Hernandez.

He said that some 40,000 Filipinos – professionals, skilled and semi-skilled workers – lived in South Korea, while between five and seven were known to be in North Korea.

Hernandez said the DFA had “not had a chance to actually verify” if the few Filipinos known to be working for nongovernment organizations in North Korea had left the reclusive state.

Filipinos who wish to return home from South Korea at this time will have to shoulder their own expenses as the Philippine government only pays for air travel under a level 4 alert.

The DFA also has yet to issue a travel advisory on South Korea, and trips into the country for business and tourism are still allowed.