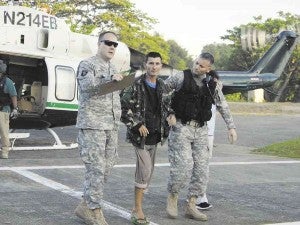 ‘Smiling, skeletal’ is how Australian Warren Richard Rodwell is described after 15 months in captivity. PHOTO FROM WESTERN MINDANAO COMMAND

ZAMBOANGA CITY—The ransom had changed hands and a day had passed, but Australian Warren Rodwell remained in the Abu Sayyaf’s hands. Basilan Vice Gov. Al Rasheed Sakalahul felt he had been duped and he wanted to unleash hell on the kidnappers.

But that would endanger Rodwell’s life so he reined in his anger and demanded an explanation from the Abu Sayyaf commander he had been dealing with to free the kidnapped Australian.

Sakalahul got it and was relieved when his patience paid off.

But the vice governor also learned how wrong he and the authorities had been about where the al-Qaida-linked Abu Sayyaf bandits had kept the Australian.

P4 million to the kidnappers known for beheading captives who refused to pay ransom.

Throughout Rodwell’s 15-month captivity, all of them believed the former Australian soldier was being held in Basilan, the Abu Sayyaf stronghold, or Jolo where the bandits also operated.

As it turned out, Rodwell was held not by the Abu Sayyaf but its accomplices, most likely rogue Moro Islamic Liberation Front guerrillas, in Zamboanga Sibugay, the mountainous southern half of the Zamboanga Peninsula across the strait from Basilan.

That distance and bad weather delayed Rodwell’s release and had Sakalahul given way to his anger, the Australian would have been killed there, as the kidnappers had threatened to do unless ransom was paid before Easter.

Now the authorities, too, know they should look beyond Basilan and Jolo and sniff around some other groups’ backyards in looking for the other captives of the Abu Sayyaf.

Listed as terrorists by the United Nations and the United States, as well as by the Philippines, the Abu Sayyaf is holding two Europeans, a Jordanian journalist, a Malaysian and a Japanese treasure hunter, and is demanding ransom for their release.

Sakalahul had played a key role in successful talks for the release of other Abu Sayyaf kidnap victims, and a threat to Rodwell’s life had made the authorities turn to him again for help.

At first, Sakalahul did not want to have anything to do with Rodwell because he was Australian and he still smarted whenever he remembered how the Australians treated him when he traveled to their country in 2005.

Sakalahul went there for a study tour, but his enthusiasm vanished quickly as he went through immigration at the airport.

He said immigration officers questioned him for hours because “they thought I had a terrorist-sounding name.”

“It was very discriminating and it was the most traumatic experience I’ve ever had,” he said.

But Sakalahul agreed to take part in the negotiations for Rodwell’s release out of pity for the Australian’s Filipino wife, Miraflor Gutang-Rodwell who, he said, pleaded with him “endlessly” for help, including bombarding him with text messages.

“I just couldn’t say no, because the life of her loved one was in danger. She told me the Abu Sayyaf had threatened to execute Rodwell,” said the vice governor.

He met Miraflor for the first time at the Orchid Garden Hotel here three weeks ago. It was also their last meeting, he said last Saturday, coming forward to deny speculation in Manila that “local officials and middlemen” had pocketed some of the ransom paid for Rodwell’s release.

Sakalahul said he agreed to help secure the release of Rodwell after acting Gov. Mujiv Hataman of the Autonomous Region in Muslim Mindanao  approved his participation in the negotiations.

The vice governor  said he made that clear to the Anti-Kidnapping Task Force (AKTF) led by Jeff Fanged at the meeting with Miraflor. Sakalahul explained that he needed Hataman’s approval and that he would not act as bagman because he was “a politician” and he was known as a “negotiator” in kidnappings.

Miraflor told him that the Abu Sayyaf was demanding P7 million for her husband’s release, but she could raise only P4 million.

“I told them to try bargaining to bring the ransom down to P4 million,” he said.

Sakalahul said he never negotiated directly with the Abu Sayyaf. He talked to the bandits through another negotiator who knew how to contact the Abu Sayyaf and who was introduced to him by an AKTF official by phone.

The vice governor never learned the negotiator’s name, who was called “Haji,” which was not a name but a term used to identify a Muslim man who had performed the annual pilgrimage to Mecca called haj.

Sakalahul said he and Haji, who knew how to reach Puruji Indama, leader of the Abu Sayyaf band that held Rodwell, started to exchange text messages after the vice governor agreed to help in the negotiations for Rodwell’s release.

Days after the meeting with Miraflor and the AKTF, Sakalahul said, he learned from Haji that the Abu Sayyaf had agreed to reduce Rodwell’s ransom to P4 million.

But Miraflor wanted proof of life—the answer to a question that only her husband could answer: Where did Rodwell live when he was 12 years old?

Sakalahul sent the question to the Abu Sayyaf through Haji, but the kidnappers mistook it as an attempt to discover their lair in Basilan, and they went silent.

But Indama later understood the question and passed it on to the man holding Rodwell, Sakalahul said.

“Haji sent the answer to me,” Sakalahul said. The answer was Gill Goulburn and West Tamworth, both in New South Wales, Australia.

Sakalahul sent the answer to Fanged to be relayed to Miraflor.

“The next day, Thursday, [Fanged] and Roger (Gutang) arrived in Basilan bringing the P4 million,” said the vice governor.

At 6 p.m. Sakalahul and his nephew, Mujib Sakalahul, traveled to the boundary of Al-Barka and Tipo-Tipo towns with eight AKTF operatives, including Fanged, Roger Gutang and an officer from the Army’s 18th Infantry Battalion.

In a place there that Sakalahul declined to name, the group met with Indama and Haji.

“It was my first time to see Indama and Haji in person,” Sakalahul said.

Roger Gutang handed the money to Indama, and the Abu Sayyaf commander counted it. It was P4 million. Indama called up his contact and told him to free Rodwell.

Sakalahul thought Rodwell was going to be delivered to his group, and they waited.

“It was already 9 p.m. but nothing has happened. [There were] no calls as we waited in the hinterlands of Tipo-Tipo,” Sakalahul said.

At about 10 p.m. Sakalahul’s group was already hungry and began to be restive.

Then Mujib Sakalahul’s phone beeped with the message: “Rodwell is free. It’s already on GMA-7 News and you must leave the place now.”

Where was Rodwell freed?

Indama said something must have gone wrong. He told Sakalahul’s group to wait. It was around 1 a.m., Friday, and Sakalahul demanded an explanation.

That was when Indama told him that Rodwell was being held not in Basilan but in Zamboanga Sibugay. He had been there since he was taken from his home in Ipil town, in the same province, on Dec. 4, 2011.

Indama explained that when the negotiations for Rodwell’s release went through, he ordered that the Australian be taken to Basilan and that he should be there on the same day of the ransom’s turnover.

But bad weather and a Philippine Navy blockade made it impossible for the Abu Sayyaf to cross the strait to bring Rodwell to Basilan.

When they realized that they were dealing with people who did not really have custody of Rodwell, Sakalahul, by this time very angry, and Roger Gutang demanded that Indama return the ransom.

But Haji intervened and assured them that everything would go just fine.

“That was when I threatened Haji that if nothing happened and the money was not returned to us something bad would happen to him,” Sakalahul said.

“God knows what I can do, especially now that I already know them,” he said.

Besides, he added, he had already alerted the military to move in if things went wrong.

Sakalahul’s group left and reached Lamitan late on Friday. He told Roger Gutang and the AKTF operatives to return to Zamboanga City and leave dealing with the Abu Sayyaf to him.

Hataman called to find out how things went. Sakalahul had no good news for him.

Then Haji’s text message came in: Go to Ipil and get Rodwell.

Sakalahul passed the information to Fanged, who in turn called the police and the military to alert them about Rodwell’s release in Ipil.

Hours passed but nothing happened in Ipil.

Around 1 a.m., Saturday, Sakalahul received a text message: Rodwell had been dropped off at the wharf in Barangay San Pedro in Pagadian City.

“Imagine how the troops had to quickly regroup and move out of Ipil to secure Rodwell [in Pagadian],” Sakalahul said.

Minutes later, Sakalahul said, he received a message from Fanged informing him that the Pagadian police had recovered Rodwell.

Now he was happy not only because he was able to help Miraflor  but also because the Australians were treating him correctly. They don’t think his name sounded like that of a terrorist.

“I was requested by Rodwell’s first family [to join them in the press conference in Manila] because, they said, they wanted to see me in person,” Sakalahul said.