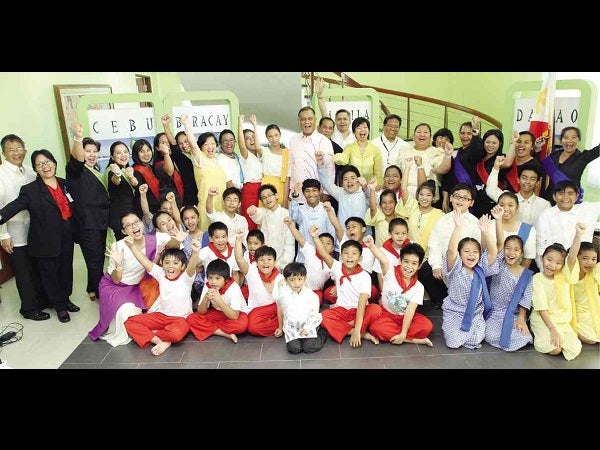 GRADUATES of the March 2013 short courses on Filipino language, history and culture at the Philippine Embassy in Brunei. PHOTO BY RAUL PADERNAL

BANDAR SERI BEGAWAN, Brunei—Hana Isabella Raj E. Hautea was one of the first batch of students when the course Wika, Kasaysayan at Kulturang Filipino was started at the Philippine Embassy here five years ago.

A Model Student Awardee of the March 2013 run, Isabella read before 32 fellow graduates a two-page speech written in Filipino at the VIP Lobby of the Philippine Embassy—Brunei’s first green building, the two-year-old bahay kubo-inspired, fully-air-conditioned two-story Chancery designed by Palafox Associates on two parcels of a Philippine government-owned corner lot in the Diplomatic Enclave. 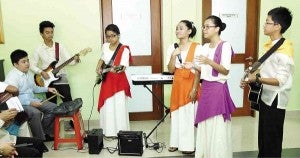 Isabelle, whose two sisters Hana Mikaella Raj and Hana Patricia Raj, also attended the program, said she grew up in Brunei used to speaking in English. This was because of the big influence of her close friends and schoolmates. “We spoke in Filipino at home before, but I am now more comfortable speaking in English. I did not really appreciate the importance of the Filipino language,” she said.

But once, when the family returned to the Philippines for a vacation, Isabelle recalled she had “many awkward experiences and I missed a lot of chances to bond with our relatives, especially with my cousins who did not know how to speak English.”

“I have a big appreciation and I am very grateful to this project because not only did I improve my speaking and proficiency in the Filipino language, I also attained a broader outlook about Philippine history and  culture. Before, I have to admit, I really did not know Dr. Jose Rizal. Now, I know (the national hero) very well… these gems gave me the inspiration to love and appreciate our Filipino culture.”

“Next month (April), I will be going back to the Philippines to continue my studies (at La Salle Bacolod). I can say that I am ready for my return.”  The course, she said, not only broadened her outlook on the Philippines but gave her a “sense of belonging.”

This program for Filipino children raised in Brunei started in 2008. Virginia H. Benavidez initiated the program during her fifth year as the first woman Philippine ambassador to Brunei. 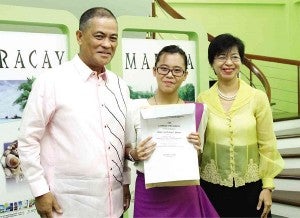 Current Philippine Ambassador to Brunei Nestor Z. Ochoa (former Armed Forces Chief of Staff like Yano) said the Embassy continues the program and now offers the free course for 10 days, twice a year, during the Brunei school breaks of March and August.

“This year, the interest of the students to learn the Filipino language was heightened with traditional songs and native dances. Some of them have even started to create Tagalog songs. Although they find it difficult to compose a whole song, we can see their desire and effort to give color to what they learned,” he said.

He said they relied heavily on volunteer teachers and members of the Filipinas sa Brunei, an association of Filipino women working and resident in Brunei. Teachers are the largest Filipino professional group in Brunei so volunteers also came from the Brunei Filipino Teachers Club.

Aside from learning the Philippine national anthem and other patriotic symbols, the students are exposed to various cultural experiences, including native cuisine and dances.

At this year’s March graduation, the students put on a song and dance show. They sang “Pinoy Ako” while strumming guitars and beating an electronic drum. The beginners imitated the walk of ducks in the dance  Itik-Itik;  the juniors and the seniors balanced lighted glasses on their heads and palms as they danced the Pandango sa Ilaw. They knocked on coconut shells, imported from Manila, in Maglalatik. Wearing native costumes, they joined the volunteer teachers in black dress and colored sashes and sang “Ako ay Pilipino,” a George Canseco composition made popular by Kuh Ledesma, and “Pilipinas Kong Mahal.”

“This has been one of the most challenging times for the Embassy to hold the Filipino program, given the absence of Department of Foreign Affairs funding for the project,” the Philippine Embassy said.