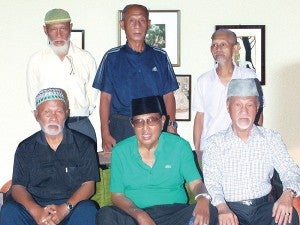 MANILA, Philippines—The Sultanate of Sulu and North Borneo said on Wednesday that an uncle of Sultan Jamalul Kiram III was killed in Sabah by Malaysian security forces on Sunday.

Abraham Idjirani, spokesperson for the sultanate, said the slain Jamjam Salih was 71 to 74 years old and was an ustadz, a religious leader, and he had been living in Semporna town with his family since 1990.

“They (Malaysian authorities) did not know that he was a peaceful and religious man,” Idjirani said by phone.

Idjirani did not say how Salih was killed. Jamalul’s daughter, Princess Jacel Kiram, said Salih was arrested on Sunday and killed.

But there were no reports of arrests or killings involving followers of the Sulu sultan in Sabah on Sunday.

The INQUIRER contacted a Sabah reporter to check the sultanate’s claims about Salih’s killing and was told that Sabah police reported no arrests or killings on that day.

Jacel said she had been talking with her uncle Agbimuddin Kiram and he told her that Salih was arrested in Lahad Datu after the authorities had determined that the ustadz was a relative of the Kirams.

Jacel said, however, that the information about Salih’s arrest and death was unclear.

The princess said Agbimuddin, whom Malaysian authorities said had abandoned his men and slipped back to southern Philippines, was in Sabah and regularly called to assure the family that he remained safe despite intense police military operations against the followers of the Sulu sultan.

The intrusion of Agbimuddin’s armed group into Sabah on Feb. 9 to press the Sulu sultanate’s claim to the territory has led to the three-week-old fighting between his men and Malaysian security forces.

Sixty-five fighters from Agbimuddin’s group have been killed in the fighting that began on March 1.

Eight policemen and two soldiers have been killed on the Malaysian side.

Jacel blamed the violence on the Malaysian government, saying Agbimuddin’s group did not go to Sabah to fight but to spend their last days in their own homeland.

“We do not want war,” Jacel said, adding that Agbimuddin’s men were shooting back only to defend themselves.

The fighting in Sabah has forced thousands of Filipinos illegally living in the eastern Malaysian territory to leave and return to the Philippines.

Nearly 4,000 undocumented Filipinos have landed in Mindanao after fleeing Sabah in the past three weeks.

Most of them, however, say they want to go back to Sabah when the crisis is over.

On Monday a boat with 100 undocumented Filipinos landed in Tawi-Tawi, bringing to 3,864 the number of returnees since fighting in Sabah began on March 1.

“I think it’s fair to say it’s big in terms of actual lives involved. But given the total number of Filipinos there that we know, it’s still very manageable,” Social Welfare Secretary Corazon Soliman said yesterday.

Soliman said the total number of returnees could be larger.

“We don’t have a good handle of the number. They’re coming in trickles. I’m sure there could be arrivals that we’re not able to monitor,” she said.

Most of the returnees came from Lahad Datu, Sandakan and Semporna and landed in Taganak and Sibutu islands in Tawi-Tawi.

The government has provided P13.4 million worth of food and transportation assistance for the returnees, Soliman said.

At the Kirams’ home in Taguig City, senatorial candidate Margarita Cojuangco said she would help the Sulu sultanate provide legal assistance to its followers who had been arrested and facing charges in Sabah.

“We would like to raise funds from a donation of P10 to P100 to help the legal team to help Sultan Kiram,” Cojuangco said.

She said the legal team is composed of private lawyers with their own law firms.

“They have to travel to the different islands of the Philippines. They don’t charge legal fees. The concern of the sultan is we should help them at least to bring justice and to work for human beings,” Cojuangco said.

Jamalul said Cojuangco came to help on his invitation. With reports from TJ Burgonio in Manila and Karlos Manlupig and Allan Nawal, Inquirer Mindanao