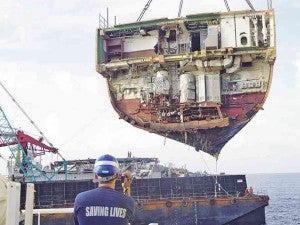 The bow of the US minesweeper Guardian is lifted for placing on a barge during shipbreaking operation by a Singaporean salvor company to remove the ship from the protected Tubbataha Reef in the Sulu Sea. The Guardian ran aground on the reef in January, and has to be broken up to save the reef from further damage. PHILIPPINE COAST GUARD

MANILA, Philippines—The salvage team dismantling the USS Guardian has completed the cutting and lifting of the bow, or forward section, of the US Navy minesweeper and its transfer to a barge, according to the Philippine Coast Guard (PCG).

In a text message to the INQUIRER, Balilo said preparations were underway for the cutting of the remaining portions of the hull, or outer shell, as well as the superstructure of the 68-meter vessel that has been stuck on Tubbataha Reef since Jan. 17.

Citing good weather at the reef, Balilo said the salvage operation was expected to continue through Holy Week.

The operation began on Feb. 22 but was suspended at least four times due to bad weather.

The PCG search-and-rescue ship BRP Romblon has been closely monitoring the operation.

Aside from the Romblon, seven other vessels are in the vicinity of the reef—the US Navy supply-ships Safeguard and Wally Schirra; the crane vessels Jascon 25 and SMIT Borneo; the barge Seabridge S-700, and the tugs Intrepid and Archon Tide.

In an earlier text message to the INQUIRER, Balilo had said the “weather has been very favorable to continue the salvage operation,” citing “wind speeds of 7 to 12 knots and waves of 0.3 to 1.2 meters in the Tubbataha Reef area.”

The salvors failed to meet the original March 23 deadline for completion of the operation.

“March 23 was just the target date set by the team to complete the task, but of course they had to consider so many factors, including weather disturbances and other obstacles. They would have wanted to finish the operation at the soonest possible time,” Balilo said.

“There was no mention in the salvage plan about the salvors taking a Holy Week break so we will continue working. They have been working even on Sunday except when there was unfavorable weather conditions,” said Commodore Enrico Efren Evangelista, head of both TFT and PCG-Palawan district.

Evangelista said that more than meeting a deadline, the primary consideration was the safety of the workers dismantling the ship and the prevention of further damage to the reef, which is considered a World Heritage Site. With a report from Tina G. Santos