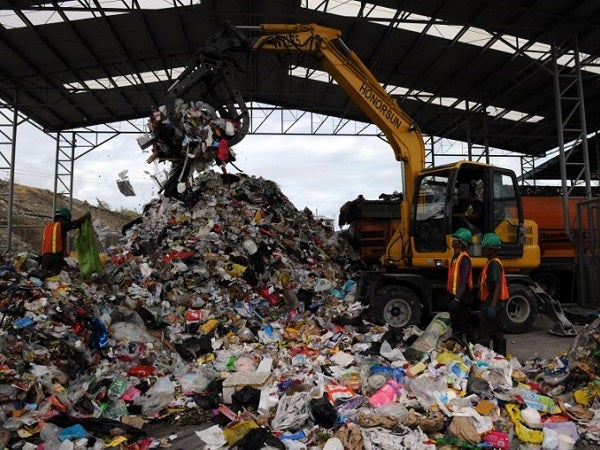 In this photo taken on February 21, workers are segregating garbage at the Material Recovery Facility (MRF) at the Payatas landfill in Quezon City. The sorted recyclable materials are sifted by machine shredder which are then compacted and wrapped with plastic and convert them into bales, where they are bought by companies to be used as alternative burning fuel. AFP

MANILA, Philippines—Teresita Mabignay does her ironing using free of electricity on the slope of a garbage dump, an unlikely beneficiary of efforts to turn the Philippines’ growing rubbish problems into a clean-energy windfall.

Mabignay lives at the base of one of Manila’s largest landfills, which was the first in the country to have its methane gas converted into power as part of a United Nations’ program aimed at tackling climate change.

Decomposing rubbish produces methane, which is one of the greenhouse gases that scientists blame for global warming, and turning it into electricity saves it from rising up into the atmosphere while reducing the need to burn fossil fuels.

The methane is captured with pipes that are dug into the landfill, similar to wells that extract gas from under the ground or ocean. Methane is then sucked down to a power station at the bottom of the dumpsite and pumped into generators to make electricity.

For the past few years Mabignay and other housewives from the slum community at the bottom of the Payatas landfill have been given free access to the power at a hall built at the dumpsite.

“It really helps because it cuts down on our electricity bills… sometimes we use the savings to buy food,” said Mabignay, 50, whose husband earns the equivalent of about $200 a month working as a security guard at the dumpsite.

The company behind the project, Pangea Green Energy Philippines, could afford to be generous with its electricity as it was earning hundreds of thousands dollars to capture and convert the gas.

Under the UN program, industrialized countries can meet their Kyoto Protocol commitments to cut greenhouse gas output by funding projects that reduce emissions in developing nations such as the Philippines.

Companies in developing countries earn credits for reducing emissions, each equivalent to one ton of carbon dioxide. The credits are then sold to companies, institutions or governments in industrialized countries to offset their emissions.

Pangea president Jennifer Fernan Campos said the Payatas energy project was set up to take advantage of the UN scheme, with the first kilowatts generated in 2008.

“We are also very gratified to be helping the environment and the community. In our own little way we are mitigating greenhouse gas emissions,” she said.

Thousands of renewable energy projects in developing countries have been registered under the UN’s Clean Development Mechanism since it began in 2005, including wind farms, solar stations and hydropower dams.

There have also been many waste-to-energy projects, with four others in the Philippines starting up after the pioneering Pangea operation, according to industry websitewww.cdmpipeline.org.

However the market price for each ton of greenhouse gas that companies save started dropping sharply in 2010, partly because of the economic meltdown in Europe which was the biggest source of revenues.

“Our rate is a floating one so when the market collapsed, we suffered,” Fernan Campos said, explaining they made the mistake of not locking in a higher price when they had the chance.

Industry experts have warned the carbon trading scheme is in danger because of the collapse in prices, and many clean-energy projects face an uncertain future.

However Fernan Campos said the Payatas project had become commercially viable without the UN-channelled money.

She said Pangea this month expanded capacity from 200 kilowatts to one megawatt, and began selling directly onto Manila’s electricity grid.

Previously the electricity generated at Payatas had just been used to power operations at the landfill and for the nearby slum communities via the ironing project and neighbourhood street lights.

The amount of greenhouse gases that are now being saved at Payatas is the equivalent to taking 18,000 cars off Manila’s roads, according to Fernan Campos.

She said the project had a host of other environmental benefits, including less direct air pollution for people living close by. The extracted methane gas could also no longer contaminate the water system.

Nevertheless, Greenpeace and some other environment groups oppose waste-to-energy projects, arguing their green credentials are often exaggerated and that they create a financial incentive for more rubbish to be dumped.

“The only way to address the issue of methane generation from waste is to stop the rubbish going to the landfill in the first place,” Greenpeace Philippines programme manager Beau Baconguis said.

“Having such projects in place encourages the generation of waste, rather than eliminating it, because you need waste to run the facility.”

Baconguis said there was no vision from the Philippine government to reduce waste, and that Manila’s roughly 12 million residents were producing between 6,000 and 8,000 tons of rubbish every day.

However Fernan Campos insisted Pangea was not lobbying for, or encouraging, more waste to be dumped at Payatas.

She said the local government had implemented recycling and other waste-reduction policies in recent years that had seen the amount of rubbish going into the landfill drop from 1,800 tons a day to 1,200.

“We are just clearing whatever is there, and helping the environment at the same time,” she said.