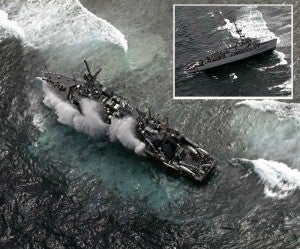 POWERLESS. Giant waves batter the USS Guardian, a minesweeper that ran aground in the Tubbataha Reefs in the Sulu Sea, tossing the ship some 90 degrees from its position on Thursday (inset) and making it parallel to the reef line. The photographs are courtesy of the AFP FILE PHOTO

MANILA, Philippines—A United States Navy-contracted salvage team has completed the cutting and lifting of the bow, or the forward section of the USS Guardian and its subsequent transfer to a barge, the spokesperson of the Philippine Coast Guard (PCG), said on Wednesday.

In a text message to the Philippine Daily Inquirer, he said the salvage team has been preparing for the cutting of the remaining portions of the hull, or outer shell, as well as the superstructure of the 68-meter US Navy minesweeper.

Citing “good weather” in the reef area, Balilo said the salvage operation would continue the rest of the Holy Week.

According to Balilo, the Coast Guard-led Task Force Tubbataha had expressed confidence the operation would be completed “as soon as possible.”

The USS Guardian dismantling operation began on February 22 but was suspended at least four times due to bad weather.

Upon the instructions of the task force, the PCG search-and-rescue ship BRP Romblon has been closely monitoring the operation.

Aside from the USS Guardian and the BRP Romblon, seven other ships were in the vicinity of the reef: the US Navy supply vessels Safeguard and Wally Shirra; crane vessels Jascon 25 and SMIT Borneo; barge Seabridge S-700; and the tugs Intrepid and Archon Tide.