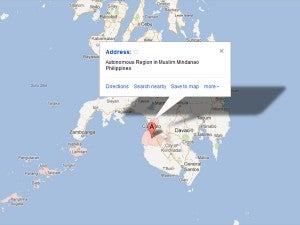 COTABATO CITY, Philippines—The UK-based Plan International said it was appalled at the fact that close to one million residents of the Autonomous Region in Muslim Mindanao (ARMM) has obtained no birth certificates to date.

Carin van der Hor, Plan International Philippine director, said in a statement that this made the ARMM the area with the highest number of unregistered births among the Philippines’ 15 regions.

She said roughly 970,000 people have been living without birth certicates, a very large number as it accounted for about 30 percent of the ARMM’s population.

The official ARMM population based on government-gathered data is 3.25 million, according to Commando Pilimpinas, regional director of the National Statistics Office in the ARMM.

Van der Hor said one reason for this high number of unregistered births in the ARMM was the inaccessibility of government offices where they could register.

As shown by a Plan International study, she said many Muslims have been living far from government centers and the lack of transportation has dissuaded them from traveling there.

Van der Hor said the unstable peace and order condition in other areas of the region has also been a factor in the high number of unregistered births.

Nationwide, at least 7.5 million Filipinos have no birth registration, according to Van der Hor.

“It means that out there, a lot of Filipinos do not enjoy the right to a name and a nationality, this is a basic human right. It means they cannot prove their identity,” Van der Hor said in a statement, a copy of which was obtained by the Philippine Daily Inquirer on Saturday.

She said this was a sad fact because “without birth certificates, many Filipinos could hardly find jobs or acquire travel documents, among others problems.”

To reduce the number of unregistered births in the ARMM, the NSO has started mobile birth registration in Maguindanao, Lanao del Sur, Basilan, Sulu and Tawi-Tawi, Pilimpinas said.

He said the conduct of mobile registration – where NSO personnel go from one area to another – would encourage parents to have their children registered, no matter their ages.