Place for Sabah in flag sought 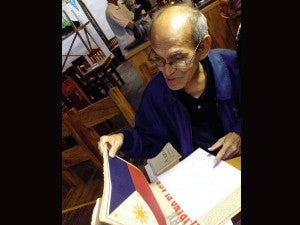 EMMANUEL OSORIO, 71, spent his years advocating that Mindanao Muslims and indigenous Filipinos are entitled to a ninth ray on the flag. This week, he introduced a star on a proposed flag with a sun that has nine rays, in case Sabah actually becomes Philippine territory. VINCENT CABREZA/INQUIRER NOTHERN LUZON

BAGUIO CITY—There’s a fourth star on a redesigned Philippine flag for Sabah, courtesy of a movement that has campaigned for changes in the national banner for four decades to include a ninth ray of its sun to represent Muslims and indigenous Filipinos.

The Ninth Ray, a historical reform movement born in 1969 at the University of the Philippines in Diliman, Quezon City, believes that the flag must not only portray the freedom the country won through a revolution, but also the freedom that was preserved by Muslims and indigenous peoples.

Author Emmanuel L. Osorio, one of Ninth Ray movement’s founders, said the minority groups were not colonized and must be honored with a symbol like a ninth ray so “we can be one nation.”

He said a flag symbolizing reconciliation could end the conflicts in Mindanao and among indigenous Filipinos.

“We can’t convince them they are part of the country if they are not symbolized on the flag,” Osorio told a gathering here on Tuesday, where he reintroduced the movement.

He displayed his latest rendition of the flag that features a sun with nine rays and a Sabah star inside a white rectangle that also contains the three stars which symbolize the country’s three main geographical divisions: Luzon, the Visayas and Mindanao.

The rectangle replaced the triangle that had been part of the Philippine flag that was hoisted by Gen. Emilio Aguinaldo during the proclamation of Philippine independence on June 12, 1898 in Kawit, Cavite.

The Sabah star was incorporated “in principle,” Osorio said, believing that the controversy ignited by the Sultanate of Sulu would inspire debate as to how Muslim Filipinos should be represented on the flag.

Since February, armed followers of the Sultan of Sulu, Jamalul Kiram III, had waged a shooting war with Malaysian authorities after they staked claim over Sabah.

Sabah has not been part of the Ninth Ray crusade until now. Osorio said all that Ninth Ray wants to express about Sabah was that “if we get Sabah, then it could be represented by the star.”

He said the present flag’s eight rays represent “freedom lost and freedom regained” during the Philippine Revolution, but historians have been so engaged with the glory of revolutionary battles that they neglected the provinces which escaped colonization.

Former Sen. Richard Gordon sponsored in 2008 Senate Bill No. 2590 to introduce a ninth ray to the flag by amending Republic Act No. 8491, also known as the Flag and Heraldic Code of the Philippines.

Gordon’s bill was substituted by Senate Bill No. 3307 sponsored by Sen. Francis Escudero. SB 3307 was approved on third reading in September 2009. The bill was sent to the House of Representatives for concurrence and consolidation with House Bill No. 6424 by the bicameral conference committee.