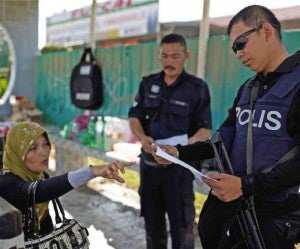 Malaysian policemen validate a woman’s documents during a security check in Lahad Datu on March 11, 2013, in the face of a monthlong intrusion of the followers of Sultan Jamalul Kiram III into Sabah. AFP FILE PHOTO

MANILA, Philippines – Malaysia on Wednesday categorically denied the alleged human rights abuses committed by its security forces against Filipinos in Sabah, saying that their security forces have been complying with the law.

“The Malaysian Government strongly rejects allegations of human rights abuses in Sabah, Malaysia as recently reported by some Media in the Philippines,” the Malaysian Ministry of Foreign Affairs said in a statement released Wednesday evening.

“The Malaysian Government wishes to assure all concerned that the Malaysian authorities continue to act in accordance with the applicable domestic laws and international law in discharging their responsibilities in the face of blatant aggression by the armed militant group from the neighbouring southern Philippines,” it said.

The Malaysian embassy cited reports by the Philippine Daily Inquirer, which, along with INQUIRER.net, is a member of the Inquirer Group of Companies, on the experiences of refugees who fled Sabah and returned to their homes in Tawi-Tawi province to avoid being caught in the hostilities between Malaysian security forces and the supporters of the Sultan of Sulu led by Raja Muda Agbimuddin Kiram.

The refugees recounted how some Filipinos were being rounded up for being alleged supporters of Kiram who sailed to Sabah, upon orders of his brother Sulu Sultan Jamalul Kiram to reclaim what they insist was their rightful territory.

The refugees also claimed that some Filipinos were shot and killed by Malaysian police.

“The allegations published by Inquirer, one of the dailies in the Philippines on 9 and 10 March 2013, in particular have been found to be unjustified and unsubstantiated, and those reports clearly run counter to professional journalism,” the statement said.

“The reported allegations are fabrication of lies by those whose intention are to damage and strain the good and close relations between Malaysia and the Republic of the Philippines,” it said.

It further said that the Chief of Police and the Malaysian Defense Minister had both strongly denied the allegations that Malaysian security forces had committed any human rights abuses.

“The Chief of Royal Malaysian Police in Sabah, who is one of the top police officials overseeing the operation against the armed militant intruders in Lahad Datu and surrounding areas, had on 10 March 2013 categorically denied those allegations,” it said.

“That statement was confirmed on 11 March 2013 by the Minister of Defence of Malaysia, who also strongly denied allegations that the Malaysian security apparatus are randomly targeting Filipinos of Suluk/Tausug descent in Sabah,” the statement said.

The statement further said that it was taking all necessary measures to ensure that the “humanitarian needs of all civilians in the concerned areas are fully addressed.”