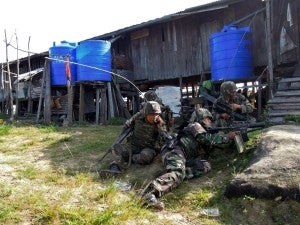 In this Tuesday, March 5, 2013 photo released by Malaysia’s Ministry of Defense, Malaysian soldiers join an assault near the area where a stand-off with Filipino gunmen took place, at Tanduo village in Lahad Datu, Borneo’s Sabah state, Malaysia. AP FILE PHOTO

Three gunmen also died in the shootout in Sabah on the island of Borneo, armed forces chief Zulkifeli Zin said, which underlined the continued deadly threat posed by the invaders in Malaysia’s biggest security crisis in years.

Authorities did not provide an overall death toll from the month-long drama, but reports and government statements had indicated an earlier count of 63 killed prior to Tuesday’s clash — mostly intruders.

The gunmen, who claim to be the “royal army” of a self-styled Philippine sultan, landed in Sabah last month to assert a long-dormant claim on the region, stunning Malaysia and injecting tension into ties between the two neighbors.

After a three-week standoff in a sleepy farming village surrounded by palm oil plantations, a violent shootout triggered a Malaysian armed forces attack March 5 that sent the gunmen into hiding in surrounding farmland and a nearby village.

Police also said Tuesday they had confirmed that a militant killed earlier was one of the group’s top leaders, identified by Malaysian media as Haji Musa, a former commander with the Moro National Liberation Front (MNLF).

The MNLF had waged a rebellion against the Philippine government in the country’s Muslim south until signing a peace deal in 1996.

Eight police officers were killed in earlier shootouts, and security forces also shot dead a teenager over the weekend. It has not been made clear whether the boy was a local or linked to the militants.

Authorities have also arrested at least 97 people throughout the state and are investigating if they have links to the incursion. They have not revealed any further details.

Supporters of Manila-based Jamalul Kiram III claiming he is heir to the defunct southern Philippine sultanate of Sulu have said about 235 people took part in the mission.

Manila has come under pressure to prevent the deaths of the Philippine nationals, while Malaysian public sentiment has strongly backed the tough army action.