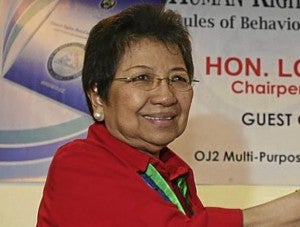 MANILA, Philippines—Commission on Human Rights (CHR) Chairperson Etta Rosales said Tuesday her team is working on a documentation of Filipinos arriving from Sabah as its first step to verify reports they have been mistreated by Malaysian authorities in Sabah.

In an interview with Radyo Inquirer 990AM, Rosales said the documentation, which started last week, would determine, among others, the number of children, women, and men who evacuated to the southern provinces in Mindanao amid escalating clashes between the “royal army” of the Sultanate of Sulu and Malaysian forces over Sabah.

(It’s very important for us to create a data base on the evacuees so we will know how many have been victims of human rights violation.)

Reports had it that Malaysian forces harassed some Filipinos, including those who have no involvement in the standoff.

She said another team from the CHR will be sent to Tawi-Tawi to continue the documentation.