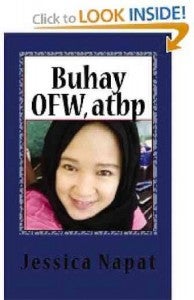 Napat, a hotel and restaurant management graduate and mother of two, said she wrote the book to correct misconceptions about OFWs.

For instance, she said, they were often accused of acting like they were too rich for their old neighbors when they came home.

But most likely, the real reason for their reluctance to leave the house was because they did not have the money to show for all the years they toiled abroad.

Currently an entrepreneur affiliated with the Alliance in Motion Global Inc., Napat said, through the book, which included contributed stories, she hoped to show people that not all OFWs were rich, arrogant or any of those other bad things they were thought to be.

577224&sr=1-5&keywords=tatay+jobo+elizes to know  more about the book and to order copies.