UN calls for end to violence in Sabah 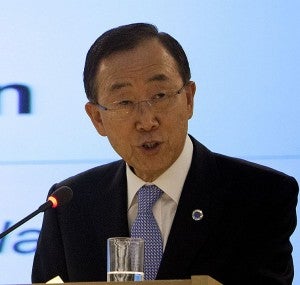 MANILA, Philippines—The United Nations has called for an end to violence in  Sabah as it appealed for a dialogue among parties involved to peacefully settle the dispute.

In a statement issued from his office, UN Secretary-General Ban Ki-moon also called on parties involved to uphold international human rights standards amid escalating hostilities there.

“The Secretary-General is closely following the situation in Sabah, Malaysia.  He urges an end to the violence and encourages dialogue among all the parties for a peaceful resolution of the situation,” said the statement issued Wednesday in New York.
“He urges all parties to facilitate delivery of humanitarian assistance and act in full respect of international human rights norms and standards,” the statement read.

This is the first time the UN issued a statement on the situation in Lahad Datu, where Kiram’s followers has been standing their ground for more than three weeks now asserting ancestral ownership of Sabah.

It was silent on the dispute between the Philippines and Malaysia for ownership of Sabah — a matter which the Sulu Sultan said he would elevate to the world body.

Fighting broke out Friday between the armed group and Malaysian forces amid failed appeals for Kiram’s followers to leave Lahad Datu.  The death toll has been rising on both sides.

The Philippines continues efforts to negotiate for Kiram group’s unconditional surrender as Malaysia stepped up efforts to round up the Sulu fighters, including the launch of air and ground strikes.