Sabah not a poll issue–UNA 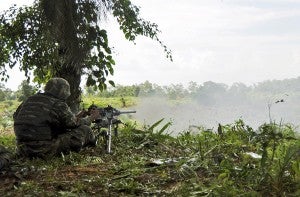 MANILA, Philippines—The leadership of the United Nationalist Alliance (UNA) has officially agreed not to use the Sabah conflict as a campaign issue but it is another thing for individual candidates.

Rep. Toby Tiangco, the UNA campaign manager, said Wednesday that while the UNA would steer clear of the issue, it would not stop its candidates from speaking out on what is happening in Sabah.

Tiangco said he himself personally felt that the Aquino administration had mishandled the situation in Sabah, which has claimed the lives of Malaysian police and followers of Sulu Sultan Jamalul Kiram III.

He said his feeling was the Aquino administration “will self-destruct because of this.”

Tiangco said UNA wanted to keep off the Sabah issue as it did not want the rival Team PNoy to accuse it of capitalizing on the controversy.

In Cagayan de Oro City where he was campaigning Wednesday, Sen. Francis Escudero said senatorial candidates should not capitalize on the Sabah issue to advance their campaign.

“This is not an election issue and should not be used to propel politicians into the limelight. Do not use the issue to make yourselves popular (among the voters),” he said.

Escudero asked “those who are fanning the flames” to desist as it could “trigger war” between the Philippines and Malaysia.

He cited a statement made by some politicians, whom he would not name, that the government should send the Armed Forces to support the Sultan’s followers was misplaced advice.

“We cannot use force to advance our cause in reclaiming Sabah, however high or morally right our claim is,” he said.

According to Escudero, President Aquino should be given a free hand in working and deciding on the issue but should be made accountable for the result of his actions once the issue has been resolved.

“If there’s a problem afterwards, then we should demand accountability after the issue has been resolved,” he said.

He said what Aquino needs now was support and not criticism, noting that some politicians are even talking of impeaching the President.

“We should put our voices together behind our President while the Sabah issue is hot,” Escudero said.

Militant lawmakers have called for a congressional probe into the Sabah crisis, particularly Aquino’s “mishandling” of the issue. They also said the President had committed treason for siding with the Malaysian government.

“Aquino clearly committed treason when he did nothing as Malaysian forces attacked the Filipinos in Sabah,” Vencer Crisostomo, Anakbayan national chairman, said in a statement.

“He essentially gave the green light to the Malaysian government to proceed and massacre the Filipinos in Sabah. This is unforgivable, blood is on his hands,” he said.