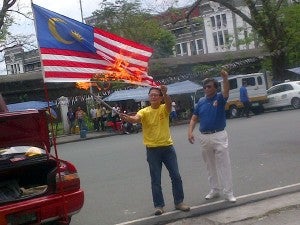 MANILA, Philippines–A retired police officer set fire to a Malaysian flag in front of the National Press Club in Manila as he condemned President Benigno Aquino’s handling of the Sabah issue.

“Instead of protecting and supporting them, President Aquino instead castigated [the Filipino gunmen in Sabah],”  Abner Afuang, also a media man and a former Mayor of Pagsanjan, said in Filipino.

Last year, he burned a Chinese flags in front of the Department of Foreign Affairs office in Pasay City in protest of Beijing’s alleged intrusion into the Philippines’ territorial waters.

Malaysia Tuesday launched an attack with jet fighters and soldiers on up to 300 followers of Sultan Jamalul Kiram III of Sulu in a bid to end a three-week standoff in which 27 people had already been reported killed, including eight policemen.

The Filipinos, calling themselves members of the “royal army” of the Sultanate of Sulu, are in Sabah to stake their claim on Sabah. With Agence France-Presse