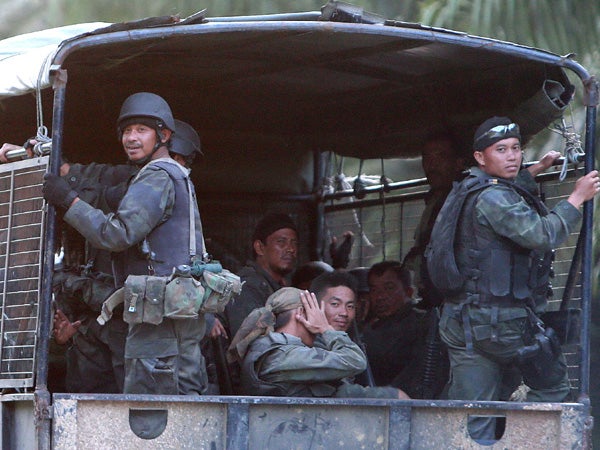 Malaysian army commandos in the back of their truck move on the way to join an assault near the area where a stand-off with Filipino gunmen took place, in Tanduo village, Lahad Datu, Borneo’s Sabab state, Malaysia on March 5, 2013. AP

Malaysia Tuesday launched an attack with jet fighters and soldiers on up to 300 followers of Sultan Jamalul Kiram III of Sulu in a bid to end a three-week standoff in which 27 people had already been reported killed, including eight policemen.

Prime Minister Najib Razak had declared the operation was “weeding out” the holed-up followers of Kiram, who had come to assert a long-dormant claim to Sabah.

But authorities later indicated the militants had escaped into surrounding farmland in the remote region of Borneo island, where residents were already on edge over reports of roaming gunmen and two bloody shootouts.

“Follow-up action and house-to-house searches are being carried out carefully to ensure the safety of the policemen and soldiers,” state news agency Bernama quoted police as saying.

A leader of the Moro National Liberation Front (MNLF), which waged an insurgency against the Philippine government until 1996, said hardened fighters from his Muslim group had arrived to support the militants.

“Many have slipped through the security forces,” Muhajab Hashim told Agence France-Presse in Manila.

“They know the area like the back of their hands because they trained there in the past,” he said, referring to long-standing allegations that Malaysia helped trained MNLF leaders in their insurgency against the Philippines.

“We are expecting more of them to join (the battle) even if our official instruction is for them to refrain from going.”

Malaysian federal police chief Ismail Omar said late Tuesday after the assault that no militants had yet been found dead or captured. He did not explain how they could have escaped a cordon in place for the past three weeks.

“I have instructed my commanders to be on alert because we believe the enemies are still out there,” Ismail told reporters.

“We of course hope that they have not escaped.”

Malaysians, accustomed to watching neighbors Thailand and the Philippines grapple with Muslim insurgents, have been shocked by the drama, and authorities have been criticized for the ease with which the invaders slipped in to Sabah.

The crisis comes as Malaysia’s 56-year-old ruling coalition is bracing for what is expected to be the country’s closest-ever election against a formidable opposition, which has slammed the handling of the incursion.

The episode began February 12, when Malaysia’s government said an estimated 100-300 armed Filipinos had landed in Sabah and were surrounded in the sleepy farming village of Tanduo.

After an initial standoff, violence erupted there Friday with a deadly shootout, followed by a second gunfight a day later in another town hours away. Authorities have said 27 have died in the shootouts and related violence.

The Sulu gunment are followers of Kiram, 74, the Manila-based self-proclaimed heir of the former Sultanate of Sulu, which once controlled part of the southern Philippines and claimed sovereignty over Sabah.

The Sulu sultanate’s power faded a century ago but its heirs continue to insist on ownership of resource-rich Sabah, and still receive nominal Malaysian payments under a lease deal originally struck by Western colonial powers.