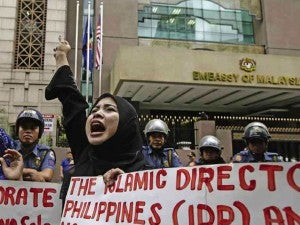 A Filipino Muslim woman is one of about 40 who rallied at the Malaysian Embassy in Makati City on Tuesday to protest air strikes and mortar attacks on nearly 200 Filipino followers of Sulu Sultan Jamalul Kiram III in Sabah. BULLIT MARQUEZ/AP

MANILA, Philippines–Militant groups arrived at Mendiola in Manila Wednesday morning to stage a protest rally to assert the rightful claim of the Philippines over Sabah and to condemn the government’s “mishandling” of the issue.

“Masakit ang aming kalooban (Our feelings were hurt),”Sharif Juhur Hali of the Islamic Directorate of the Philippines said over the alleged mishandling of President Benigno Aquino III of the Sabah crisis, adding they would want to hear directly from the President if his administration has indeed disowned the Tausugs.

He also called on the President to do something about the continuous attack on Filipino gunmen in Sabah, saying that their human rights should also be put into consideration.

Gary Martinez of Migrante International, meanwhile, said the Aquino administration belittled the Sultanate of Sulu and handled the issue just like an “ordinary” case.

The group said the Aquino administration should not make further moves to “escape” accountability by “inventing conspiracy theories or pointing fingers at political rivals.”

“Any blood further shed in Sabah will be blood in the hands of Aquino,” the group said.

Bayan, meanwhile, condemned the statement attributed to Malaysian Foreign Minister Anifah Aman which labeled the members of the Sultanate of Sulu as a “terrorist group.”

Dr. Carol Araullo, Bayan chairperson, said such statements further insult the “royal army,” several of whom have already been killed in continuous clash with Malaysian forces.

“Asserting our rightful claim over a disputed land is not a terrorist act,” he said, adding that the Sultanate’s followers were just forced to defend themselves after being attacked by Malaysian forces.

Araullo said unfortunate events could have been prevented had President Aquino recognized the legitimacy of the cause of the Sultanate and if he engaged Malaysia in a sincere negotiation.

On Monday, militants picketed the Embassy of Malaysia in Makati City.

The group dispersed before noon.