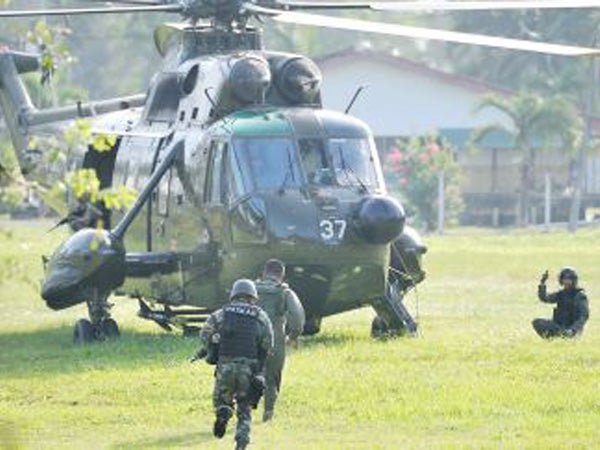 Prime Minister Najib Razak confirmed the assault was launched Tuesday morning after clashes in Lahad Datu in Sabah this past week killed eight policemen. He had earlier declared that security forces were authorized to take any action deemed necessary.

“At 7 a.m. this morning, security forces launched an attack on Tanduo village,” Najib said, adding that negotiations with the “royal army” of the Sultanate of Sulu, believed to number 100 to 300 and holed up in a farming village, had failed.

The main group of Filipinos comprises members of the clan of Sultan Jamalul Kiram III of Sulu, some bearing rifles and grenade launchers, who slipped past naval patrols last month, landed at a remote coastal village in Sabah’s Lahad Datu district and insisted the territory was theirs.

Nineteen Filipino gunmen have also been slain in Lahad Datu and another Sabah coastal district involving a smaller group of Filipinos since Friday. The skirmishes shocked Malaysians unaccustomed to such violence in their country, which borders insurgency-plagued southern provinces in the Philippines and Thailand.

“The government has to take the appropriate action to protect national pride and sovereignty as our people have demanded,” Najib said in a statement issued through the national news agency, Bernama.

Authorities made every effort to resolve the siege peacefully since the presence of the group in Lahad Datu district became known on February 12, including holding talks to encourage the group to leave without facing any serious legal repercussions, Najib said.

“The longer this intrusion persisted, it became clear to the authorities that the intruders had no intention to leave Sabah,” Najib said. “As a peace-loving Islamic country that upholds efforts to settle conflicts through negotiations, our struggle to avoid bloodshed in Lahad Datu did not work.”

Violence first erupted on Friday when a shootout between security forces and the Sulu gunmen left 12 Filipinos and two police officers dead.

Another gunbattle Saturday in the town of Semporna, hours away from Tanduo by road, left six police and six gunmen dead, raising fears of a wider infiltration.

Another gunman was beaten to death there Saturday by villagers, police have said.

Local media reported fighter jets screaming over the stand-off site and explosions were heard. Military trucks were also seen moving into the area, which is surrounded by palm oil estates.

Najib had ordered a doubling of security forces in the area after the weekend violence.

Sabah police chief Hamza Taib confirmed the attack involved ground and air operations conducted by both the police and military, which included bombing the area. He declined to elaborate, saying the operation remained ongoing two hours after it was launched shortly after dawn.

Abraham Idjirani, spokesman for the Sulu sultanate, told reporters in Manila that the Filipino group in Sabah would not surrender and that their leader was safe. The group is led by a brother of Kiram.

Lahad Datu district is a short boat ride from the Philippine province, and the clan members had rebuffed calls to leave, claiming Sabah belonged to their royal sultanate and that Malaysia has been paying a paltry amount to lease the vast territory with many palm plantations.

“We’ve done everything we could to prevent this, but in the end Kiram’s people chose this path,” Carandang said.

An undetermined number of other armed Filipinos are suspected to have encroached on other districts within 300 kilometers (200 miles) of Lahad Datu.

Some in Muslim-majority Malaysia advocated patience in handling the Lahad Datu intruders. But the deaths of the Malaysian police officers, including six who were ambushed while inspecting a waterfront village in a separate Sabah district on Saturday, have triggered widespread alarm over the possibility of more such intrusions.

For the second time in two days, President Benigno Aquino III had gone on national TV to urge the Filipino group in Lahad Datu to lay down their arms, warning that the situation could worsen and endanger about 800,000 Filipinos settlers there.

The crisis could have wide-ranging political ramifications in both countries. Some fear it might undermine peace talks brokered by Malaysia between Manila and the Moro Islamic Liberation Front, the main Muslim rebel group in Mindanao.

It also could affect public confidence in Malaysia’s long-ruling National Front coalition, which is gearing up for general elections that must be held by the end of June. The coalition requires strong support from voters in Sabah to fend off an opposition alliance that hopes to end more than five decades of federal rule by the National Front.

The US Embassy in Kuala Lumpur has advised Americans to avoid traveling to much of Sabah’s east coast, which includes towns that are embarkation points for nearby diving resort islands, because of the potential for more violence.

Supporters of the Filipino group took their campaign to cyberspace on Monday, manipulating Google listings to post a message backing the incursion.

A number of Philippine sites also were reportedly defaced by pro-Malaysia hackers.