On board the BRP Gregorio del Pilar 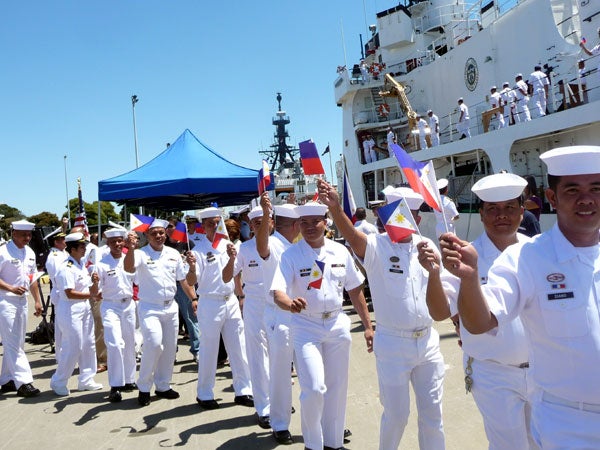 The Philippines has only a WW II vintage frigate, the Rajah Humabon, to use right now to defend the country against an attack from China’s formidable armada which includes an aircraft carrier, 21 destroyers, 68 submarines, 42 modern frigates and 760 ships. But help is on the way. In three weeks, the 378-foot Hamilton-class cutter BRP Gregorio Del Pilar will arrive in the Philippines where it will be dispatched to the Kalayaan Island Group of the Spratly Islands to defend this “Tirad Pass” from foreign invaders.

Imagine the Philippine David with its cutter slingshot against the China Goliath.

The BRP Gregorio del Pilar, the biggest ship ever to be acquired by the Philippine Navy, will be manned by a full complement of 180 officers and crew, 95 of whom were recently trained in the San Francisco Bay Area at Coast Guard Island in Alameda.

Before it was purchased by the Philippine government from the US for $13 million this May, the cutter, which was built in 1968, was largely used by the US Coast Guard for drug and migrant interdiction, law enforcement and defense readiness. As a multi-mission Surface Combatant Ship (SCS), the first gas-turbine jet engine-powered vessel in its fleet, the Philippine Navy plans to deploy it for operations in the West Philippine Sea.

On the eve of the ship’s departure for the Philippines from its Alameda base this July 17, I attended a Mass officiated on the ship by Fr. Mark Reburiano. Before Holy Communion was served, Philippine Navy Flag Officer in Command Vice Admiral Alexander Pama spoke to thank the members of the Filipino American community.

“You warmly welcomed them in your homes, you fed them and you made them feel at home” he said. “We want you all to be proud of our Philippine Navy which represents not only the Filipino people but Filipinos everywhere.”

“We may face insurmountable odds when we return to the Philippines,” he added, “but at the end of the day, it is people who are the decisive factors in any conflict and I want you all to know that we have people of outstanding quality in our navy.”

After the Mass, we joined the officers and crew at the ship’s mess hall for their final dinner in the United States. We watched the video of the May 13, 2011 turnover ceremonies attended by Philippine Ambassador to the US Jose Cuisia, Jr. and US Coast Guard Vice Admiral Manson K. Brown.

The highlight of the turnover rites was the departure of the US Coast Guard crew from the ship as the US flag was lowered and the raising of the Philippine flag on the ship as 21 members of the Philippine Navy, who had been in training in the US since February 25, 2011, boarded the ship to take command.

At the helm of the BRP Gregorio del Pilar is Navy Captain Alberto Cruz, (PMA Class of 1988) who along with his Executive Officer, Navy Commander Reynaldo Lopez (PMA Class of 1992) arrived in Alameda on February 25, 2011 together with a specially selected crew of 19 other officers and enlisted men/engineers (the “crème de la crème”) of the Philippine Navy.

They underwent intensive hands-on training on board the USCGC Boutwell, the sister ship of the USCGC Hamilton, for two months traveling to Colombia, Ecuador and El Salvador to interdict drug smugglers. With no access to the telephone or the Internet, the crew later told reporter Gemma Nemenzo, they felt like “the lost command”. Worse torture for some of them—the steady diet of potatoes, meat, potatoes and more potatoes. No rice.

At our dinner at the Officers’ Mess Hall on July 17, I sat down with Vice-Admiral Pama who had flown in from Manila just the day before to formally issue the orders to Capt. Cruz. He candidly expressed relief that the Philippine Navy was finally getting attention from the national government after years of neglect.

We recalled Pres. Noynoy Aquino’s State of the Nation Address (SONA) on July 26, 2010 when he said: “We have 36,000 nautical miles of shoreline, but we only have 32 boats. These boats are as old as the time of (US General Douglas) MacArthur.”

While Pres. PNoy Aquino has been hammered by his critics for lack of accomplishments during his first year in office, PNoy quietly found the government funds to purchase the Hamilton cutter from the US government and is negotiating to acquire even more de-commissioned cutters.

Vice-Admiral Pama shared that the decision to name the BRP Gregorio Del Pilar was no fluke. Philippine Navy officers were keenly aware of the heroic exploits of the “Boy General” who led his Filipino soldiers to victory in the Battle of Quingua on April 23, 1899 against the US forces of Col. John Stotsenburg. With the US forces breathing down on Philippine President Emilo Aguinaldo’s trail, Gen. Del Pilar and 60 Filipino soldiers defended Tirad Pass for five hours against the vastly superior 33rd Infantry Regiment led by Gen. Peyton March before he and his men were killed by the foreign invaders.

On Monday, July 18, we attended the send-off ceremonies at Alameda as Vice Admiral Pama officially issued the order to Capt. Cruz to depart for the Philippines. I then joined the Filipino-American community in shaking the hands of each of the 95 officers and crew of the BRP del Pilar to wish them each Godspeed. As I shook their hands and looked in their eyes, I worried that they may be the first casualties of a war with China over the Spratlys.

The Filipino American community has scheduled a national Day of Prayer for Peace in the Spratlys for Sunday, August 21, the 28th anniversary of Ninoy Aquino’s assassination, to pray for the peaceful and just resolution of our territorial conflict with China and for the protection and safety of the brave men and women of the BRP Gregorio Del Pilar.

(For information about organizing a Day of Prayer for Peace in the Spratlys in your city, please log on to USP4GG.org or epeoplepower.com. Send your comments to [email protected] or mail them to the Law Offices of Rodel Rodis at 2429 Ocean Avenue, San Francisco, CA 94127 or call 415.334.7800).