From the Azkals to the Malditas | Global News

From the Azkals to the Malditas 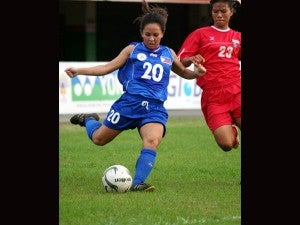 It’s highly unlikely that the Philippines can make it to a World Cup football tournament anytime soon.

But Japan’s stunning victory over the United States in the women’s World Cup final has made my cousin Butchie Impelido believe even more that, while it may take years, maybe decades, the Filipino women’s team has what it takes to shine.

Forget the Azkals for now. Time to meet their counterpart in women’s football, the Malditas.

They don’t get as much attention as the men’s team. But they’re steadily, slowly getting stronger as a team, Butchie says.

My cousin would know. He’s an official U.S. scout and recruiter for the Malditas. And he’s been involved with the team for years.

Not only that. His two daughters—my nieces Angeline and Patrice Impelido—are members of the Malditas.

Like the Azkals, the Malditas have tried to tap the talents of foreign-born Filipinos.

In fact, Butchie’s  interest in the women’s team began about six years ago after watching a Philippine game featuring Filipino American player from the University of Virginia.

He got in touch with the Philippine team’s coach and told him about Angeline, a star college player at Northern Illinois University. The coach asked for a video, and after watching Angeline play, asked Butchie to bring her to Manila for a tryout.

At first, Butchie says, Angeline wasn’t that thrilled about the idea.

“I don’t know anybody on that team,” she said, he recalled.

Father and daughter argued about it. But they eventually went to Manila, and Angeline ended up playing several games in Southeast Asia.

After six weeks on the road, they were on a plane headed back to Chicago. By then, Butchie recalled, Angeline had become excited about the idea of playing for his parents’ homeland. His daughter, he said, told him, “Thanks Dad for doing these. I learned a lot.”

And she felt so honored to represent the Philippines, he said, she even enrolled in Tagalog courses at Northern Illinois University.

Later that year, Angeline saw action for the Philippines during the Southeast Asian Games. Playing with her was her kid sister, Patrice.

They had never played on the same team before, which made the tournament special. “It was a great away to represent my country,” Patrice told me. “The team was very nice and very accepting.”

A highlight of the tournament was when the Filipino women beat Indonesia 2-0. Angeline scored the first goal. Another FilAm, Mariko Alley, scored the other.

The Malditas still have a long way to go, Butchie says.

But the growing interest, highlighted by the popularity of the Azkals, has helped attract more support.

“I’m glad football is starting to get popular,” Patrice says, although she notes that “the guys are getting a lot of the attention.”

The Azkals are clearly enjoying, even cashing in on their celebrity.  The Malditas have kept a low profile, even as they prepare for their next international encounters.

Butchie says he thinks the women’s team has a stronger chance of becoming competitive at the highest levels of football eventually.

But it’s going to be a long haul. It takes years, decades to get stronger, better.

His own daughters are proof of that. Angeline and Patrice have been playing since they were little girls. Football has been part of their lives for years. For Angeline, now a coach, it has even become a career.

But Butchie says Japan’s triumph highlights a key fact about football—and why Filipinos can excel in the game. Unlike in other sports, size, particularly height, is not a decisive a factor.

“Balewala ang height. Height does not matter,” he says.

Referring to the star U.S. player Abby Wambach, who scored a crucial goal in the Japan game, he says, “Even if they had all Wambachs on the team, it didn’t matter.”

And he adds, “In terms of physical ability, pareho lang tayo ng Japan,” noting how in physical terms, Filipino women players share many similarities with the Japanese.

But two things stood out in the game. The Japanese were very technically skilled, he said. And they appeared to be mentally tougher than the Americans.

Patrice herself watched the championship game with amazement. “Man, they beat the U.S. fair and square.”

And these are traits the Filipino women players can eventually also develop through more exposure and more experience. Patrice echoes his dad’s views, “Over time, we’ll do well.”

Their name has yet to become a household word like “Azkals.” In fact, there has even been some disagreement over the name. Butchie said there were those who didn’t like the negative connotation of ‘maldita.’

But the name has stuck. After all, Butchie explains, ‘maldita’ can also mean feisty and tenacious. “Laban ‘yan, Hindi bumibigay. They’ll keep on fighting. They won’t give up.”

In fact, the team’s Facebook page celebrates that fighting spirit with the slogan: “We kick balls!”