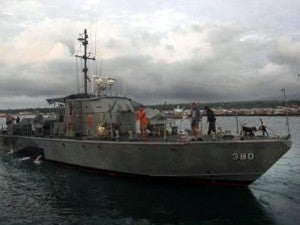 LAHAD DATU, Sabah—The Philippines sent six navy ships and an aircraft to the seas of Sulu and Tawi-Tawi as deadline for the Sultanate of Sulu’s “royal army” to leave Sabah looms, officials said.

The ships from the Philippine Navy and Coast Guard were patrolling the waters less than half an hour by speed boat from the seaside village of Tandau in Sabah, where the Sulu group of royal followers has been in a standoff with Malaysian authorities since February 9, Philippines Navy spokesman Lieutenant Commodore Gregory Fabic said Friday.

“We are conducting maritime security patrol. We were given instruction to do this to prevent the movement of people [to and from Sabah],” Fabic told Radyo Inquirer 990 AM.

“This is also to prevent the escalation of the Sabah issue,” he said.

Aside from six naval vessels and a Philippine Navy Islander aircraft, ships from the Philippine Coast Guard were also sent to the area as the country intensified its watch on the Sulu Sea amid a Friday deadline imposed by Malaysia for the Sulu group to leave the area.

Fabic said that the naval vessels would not dock in Sabah but were there only to help make the situation stabilize.

He said there were no instructions given for the evacuation of the Sulu group of about 100 men led by Raja Muda Azzimudie Kiram, the brother of Sultan Jamalul Kiram III.

“We are hoping that this will be resolved peacefully. If they are retreating, we are not there to help them because we need instructions if they can be picked up,” Fabic was quoted as saying.

“If there are conflicts, we cannot help them. We will (only go there) if it is resolved peacefully and are given instructions to repatriate them,” he added.

The Malaysian security forces, who have thrown a tight land and sea cordon around the group, are reportedly in a position to deport the group anytime but are holding back pending efforts to resolve the standoff through negotiations without bloodshed.

Meanwhile, President Benigno Aquino reportedly said in Manila that the Sulu gunmen, whose action has revived discussions in the Philippines on the dormant Sabah claim, should give up peacefully.

“Going there with arms is not the way to resolve this. When you brandish arms naturally the other side has only one way to respond to such a challenge,” Aquino was quoted as saying in his first public comment on the incident.

Aquino also said that his government had been talking to all parties, including the Sultan’s family, to find a peaceful solution.

Philippine Foreign secretary Albert del Rosario said in a separate statement that Aquino had ordered government authorities “to do everything” possible to try and urge them to peacefully withdraw and to do this as quickly as possible.

The Islamic Sultanate of Sulu once controlled parts of Borneo, including the site of the stand-off, as well as southern Philippine islands.

The sultanate leased northern Borneo to Europeans in the 1870s. While the sultanate’s authority gradually faded as Western colonial powers exerted their influence over the region, it continued to receive lease payments for Sabah.

Heirs to the sultanate still receive nominal yearly compensation from Malaysia under a long-standing agreement. One of the demands from the gunmen is more compensation.

Estimates of the number of the armed men has varied. Last week, Malaysian Home Minister Hishammuddin Hussein put the number at between 80 to 100 gunmen.

But the sultan’s spokesman, Abraham Idjirani, said in Manila there were about 400 members of the group, including 20 with arms.

Idjirani said the sultan, Jamalul Kiram, who lives in a Manila suburb, gave the men the authority to reside in Sabah and they were determined to resist efforts to expel them.

The sultan’s men in Sabah were instructed not to fire first, Idjirani added.

“But if the Malaysian military will attack us, we will be left with no choice but to defend ourselves,” he quoted Kiram as saying. Tetch Torres-Tupas, INQUIRER.net with Agence France-Presse

Read Next
PH Navy keeps tight watch on Sulu Sea due to Sabah standoff
EDITORS' PICK
Eleazar: PNP open to ICC probe but PH judicial process is working
P258M shabu seized, Chinese national arrested in Manila drug bust
Gilas out to prove Korea win not a fluke; Tab fires back at ‘lucky shot’ remark
SANTIS Delicatessen: The road to survival is sweet and savory
Man wounded as raid on illegal cockfight in Isabela leads to shootout
Piolo Pascual: The Ultimate Heartthrob continues to level up
MOST READ
Palace: Face shields no longer needed to be worn outdoors
LOOK: ‘Low vaccination’ turnout in 4 Manila sites after no walk-in policy
Lacson or Pacquiao a possible presidential candidate for NPC – Sotto
‘Pinadudumi ang politika:’ Sotto wants FB to shut down ‘troll farms’ until after 2022 polls
Don't miss out on the latest news and information.