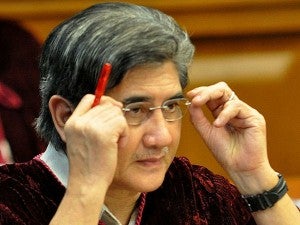 CAGAYAN DE ORO CITY, Philippines — Senator Gregorio Honasan said the Philippines and Malaysia should talk to resolve the entry of 300 Filipino followers of the Sultanate of Sulu in the Sabah region to prevent an international incident involving armed skirmishes.

“I think, both governments should sit down, and jointly help diffuse the situation, which if left unattended to, might become more complicated because of an armed confrontation,” Honasan said.

Honasan also called on Sultan Jamalul Kiram III to recall his brother, Rajah Mudah, back into the Philippines.

Rajah Mudah, in an earlier report, said that he will only follow orders from his older brother.

Sultan Kiram III, in an earlier report in the Philippine Daily Inquirer, said the royal decree that he ordered for his brother was not about war, and that he sent his brother to Sabah as an exercise of their historic, ancestral and sovereign right over Sabah.

Honasan said that the Sultan must be made to realize that his order has not been helping the government in its foreign and security policies.

“He must be made to realize that these have become more complicated,” Honasan added.

“It is time for the government to clarify these with the Sultan of Sulu and if these go out of proportion, it is a problem that we do not need,” said Honasan, who was in the city to join the regional convention of the Philippine Guardians Brotherhood, Inc.