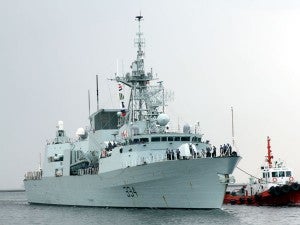 MANILA, Philippines—Officials and sailors of the Royal Canadian Navy are in the Philippines on a goodwill visit to continue Canada’s defense dialogue with the Philippines and undertake outreach projects in Manila, its Embassy said Wednesday.

Her Majesty’s Canadian Ship (HMCS) Regina is docked in Manila this week to touch base with the Philippine military and hold charity and sports events, returning to the Philippines some 16 years since its last visit.

“I am pleased to welcome HMCS Regina, its officers and crew to Manila. The Philippines has always been a very good host to our fleet and I know this visit will further strengthen a relationship that bridges the Pacific Ocean,” Canadian Ambassador to the Philippine Christopher Thornley during arrival ceremonies on Tuesday.

While in Manila, Rear Admiral William Truelove, Canada’s Commander of Maritime Forces in the Pacific, is set to meet Armed Forces Chief of Staff Emmanuel Bautista “to discuss issues of mutual interest” at the military headquarters in Camp Aguinaldo, Quezon City.

Some of the ship’s 250 crew members will also take part in sports competitions with Philippine counterparts and charity events, including a special ship tour for children beneficiaries of Project Pearls, a local effort that supports the education and nutrition of underprivileged children in a Manila slum community.

The Embassy said the Regina, a Canadian-built Halifax-class frigate, docked at the Manila port on Feb. 12 and is set to stay until Saturday

The Regina’s visit in the Philippines follows its deployment in support of Combined Task Force 150, a multilateral maritime collaboration on patrol and counter-terror operations in the Arabian Sea, the Gulf of Oman and the Indian Ocean.

As part of the 26-member naval coalition, Canada helps to “keep international sea lanes safe, while protecting against terrorist and criminal threats on the high seas.”

Canada and the Philippines have been steady defense partners over the years. In November, visiting Canadian Prime Minister Stephen Harper signed an agreement with President Aquino for Manila’s procurement of some $12.6- billion (about P500 billion) in defense equipment and expertise from Canadian defense suppliers.

The visit comes as Manila continues to build a credible defense posture with the help of defense allies amid disputes in the West Philippine Sea (South China Sea), waters that have seen frequent patrols of Chinese ships.

China claims most of the territories in the contested waters, overlapping with partial claims of the Philippines, Vietnam, Brunei, Malaysia and Taiwan.  The Philippines has filed for arbitration before the United Nations to invalidate China’s claims and stop its incursions into the country’s established maritime borders in the West Philippine Sea.

Japan, another defense ally, has also announced that it would provide 10 patrol boats to the Philippines in the next year and a half.