US liable for ship accident in Tubbataha reef—Santiago | Global News

US liable for ship accident in Tubbataha reef—Santiago 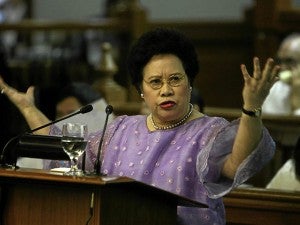 MANILA, Philippines—Rising from her sick bed, Senator Miriam Defensor Santiago slammed on Tuesday, the United States’ “magnanimity” over its warship’s destruction of the Tubbataha Reef, saying it should be held accountable for violations of both local and international laws instead of calling it an accident and promising compensation for the priceless marine park.

In her first public appearance nearly a month since taking a sick leave from the Senate, Santiago called out the US government for the “unspeakable crime” that its minesweeper, the USS Guardian, had inflicted on the world heritage site.

“The only defense of the Americans is that they allegedly used a faulty map that misplaced the location of the Reef. In other words, the Americans seem to admit that they were sloppy with their map, and that they were arrogant with the Filipino park rangers whose advice [for the ship to avoid the protected area] they disregarded,” a fired-up Defensor told a packed theater at the University of the Philippines in Manila late afternoon on Tuesday.

“Imagine they are a high-tech society, they have the gall to say our maps are wrong? This is the high-tech society? Can you actually buy wrong maps? And of all the maps out there, they happened to buy the wrong one?” Defensor said, prompting both applause and laughter from her audience.

The Guardian ran aground the reef in a protected area in the Sulu Sea on Jan. 17 as it sailed to Indonesia after a routine port call at Subic Bay in Olongapo City, a former US naval base.

The US Navy had said faulty navigation equipment may have misplaced the reef on its map, leading to the collision. Working against forces of the sea, the US Navy has decided to dismantle the $277 million ship, having earlier declared it no longer fit for use due to heavy hull damage.

Several US officials, including US Ambassador Harry Thomas Jr. and a delegation of US lawmakers who visited recently, have apologized for the incident and promised “appropriate compensation” for damages on the reef.

But Santiago, for one, is not happy about the Americans’ promise, saying they should first admit accountability and stop calling the grounding an accident.  The senator cited the account of Tubbataha park rangers who had warned the ship against sailing into the protected area but were instead told off by armed US sailors.

She also branded Thomas’ statement and apology as “doublespeak” as calling the grounding an accident “implies that the act of the US ship involved no negligence or fault.”

“In my view, the statement issued by the US embassy makes American compensation and other activities look like foreign assistance, for which we Filipinos are expected to be grateful! Gee, thanks for bumping into our reef!” said Santiago.

“I am concerned that the American offer of compensation is made to appear, not as a dictate of legal obligation under international law, but as an indulgence in American magnanimity,” she said.

The Senator, for long advocating the repeal of the Philippine-US Visiting Forces Agreement, said the US not only violated Philippine laws but also international laws.

“International law is clear that whether or not there was negligence or fault on the part of the US warship, under the principle of state responsibility, the US government is responsible for the partial destruction of Tubbataha Reef, which some say will need 250 years to be fully restored,” said Santiago.