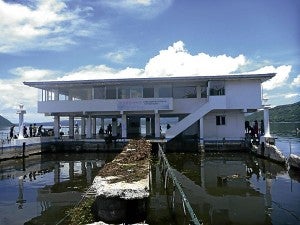 THE TAAL Volcano Jung Ang Leisure and Resort facility during its dismantling by the DENR in July last year. PHOTO COURTESY OF CENRO BATANGAS

SAN PEDRO, Laguna, Philippines—A Korean national, who owns the P5-million floating restaurant that the Department of Environment and Natural Resources (DENR) had shut down, is facing charges of violating Philippine environmental laws.

In a resolution dated Dec. 10, 2012, Sandoval said Ok violated the National Integrated Protected Areas System Act of 1992, the Ecological Solid Waste Management Act of 2000 and the Philippine Clean Water Act of 2004 for building and operating a restaurant in part of Taal Lake, a protected area.

The DENR, through the office of the Taal Volcano Protected Landscape (TVPL), in June 2012 closed down the facility after the owner refused to heed a notice of violation of environmental laws and voluntarily close down the facility.

Sandoval agreed to the findings of the TVPL that the establishment did not have a waste disposal facility. He said its toilets, for instance, are not connected to any septic tank and flush out waste directly into the lake.

The TVPL also said the company illegally reclaimed a

20-square meter portion of the lake when it built a wharf that connected the floating structure to the mainland.

In her counter-affidavit, Ok said she could not be held criminally liable because it was her grandchild, Kim Joe Hong, who managed the business.

She said she only took over the operations in July 2012 and therefore had no participation in the construction of the facility.

The facility is owned by Jung Ang Interventure Corp., the same company that earlier sought to build a spa on the mouth of Taal Volcano. The DENR in 2007, however, revoked the environmental compliance certificate for the spa project due to violations of environmental laws and strong opposition from residents and environmental groups.