1,000 sq m of coral reef destroyed by US Navy ship 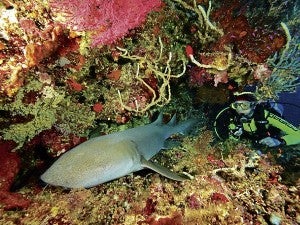 REEFS ON THE ROCKS A diver observes a sleeping shark on a ledge at the Tubbataha Reefs Natural Park. Made up of two atolls, Tubbataha’s vertiginous walls are home to 12 species of sharks. Overfished because of the sharks’ valuable fins, Tubbataha offers one of the last guaranteed shark dives in the world. Although protected year-round by armed rangers who are stationed in two-month shifts, the reefs were defenseless against the rude intrusion of a US minesweeper three days ago when it ran aground in the Unesco-named World Heritage Site. YVETTE LEE/CONTRIBUTOR

The USS Guardian has damaged “more or less 1,000 square meters” of the Tubbataha Reefs in the Sulu Sea, the spokesperson of the Philippine Coast Guard told the Philippine Daily Inquirer.

Contacted by phone, Lt. Cmdr. Armand Balilo on Wednesday said the government task force coordinating with the US Navy regarding salvage efforts on the grounded US Navy minesweeper learned about the extent of the damage from PCG divers who checked out the reefs on Tuesday.

At least 50 PCG personnel, including the crew of the search-and-rescue vessel BRP Corregidor, and an undisclosed number of crew members of three Philippine Navy boats, are in the Tubbataha Reefs Natural Park.

Aside from the USS Guardian which has been stuck on the reef since Jan. 17, two other US Navy ships are also in the area. “A US Navy supply ship has just arrived,” Balilo said.

When interviewed, he quoted Rear Adm. Rodolfo Isorena, PCG commandant, as having said there was “good coordination” between the task force and its American counterpart.

It was Transportation Undersecretary Eduardo Oban Jr., former Armed Forces of the Philippines chief of staff, who announced at a task force meeting that damage to Tubbataha Reefs had reached more or less 1,000 square meters.

The Tubbataha Protected Area Management Board has fined the US Navy for the unauthorized entry of the USS Guardian in the natural park.

President Aquino has directed authorities to immediately “take out” the 68-meter USS Guardian off the Tubbataha Reefs.

What confounded the President was the unauthorized presence of the US Navy ship in the protected area and world heritage site.

Tubbataha park superintendent Angelique Songco had said the US crew had not asked for permission from park managers to enter the marine sanctuary, as mandated under Republic Act No. 10067, or the Tubbataha Reefs Natural Park Act of 2009.

“We have no details on that, that’s why we’ll just wait for the fact-finding [team’s report], if there’s any. They are determining [it]. I don’t know how. That’s the reason why the President was asking [on Tuesday], with so much sophisticated navigation equipment, what happened? So that’s also being looked into,” said presidential spokesperson Edwin Lacierda at a Palace briefing.

The Philippine government expected the United States, which has already apologized for the accident, to indemnify the country for the damage to the reef.

“They are a strategic ally, and I think they are cognizant of their responsibility to our government and also to a very important environmental site. This was already acknowledged by (US 7th Fleet Vice) Admiral (Scott) Swift, I think, in his expression of regrets,” said Lacierda.

“Three options” were being considered by the US Navy in dealing with the grounded ship, said Oban at yesterday’s task force meeting at the Western Command headquarters in Puerto Princesa City.

“The first one is to drag the ship from the reef. Second is to lift it and third, is to just cut it into several pieces,” said Balilo.

Balilo said they were trying to lighten  the ship’s load by removing various equipment and removing fuel from it.

US Navy representatives are meeting today with a salvage operator in Singapore, according to Balilo.

“They will announce  their decision shortly on what option to take,” he added.

In the Senate, Sen. Loren Legarda called on US authorities to “own up, pay up, clean up and fix up.”

Legarda, the chair of the Senate committee on foreign affairs, said the salvage of the USS Guardian should cause the least or no further damage to the reef. With a report from Norman Bordadora