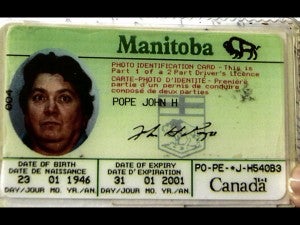 DEADLY RAGE Police probers find an old ID of Canadian John Pope who went into a deadly rage at the Cebu Palace of Justice on Tuesday. LITO TECSON/Cebu Daily News

CEBU CITY—The Canadian who went on a shooting rampage at the Palace of Justice had expressed his dismay over the justice system in the Philippines in a journal.

At the same time, John Pope considered the Philippines as his home after falling in love with a girl whom he described as his “special daughter.”

Pope poured his frustrations and fears into his journal that had been compiled in a book, titled “Justice Denied,” about his three-year “quest for justice.” He left a copy of the book with the Integrated Bar of the Philippines’ Cebu City chapter.

The Canadian wrote that he was frustrated by the snail-paced progress of the many cases filed against him by Dr. Rene Rafols. He said he hoped he would not be deported because he didn’t want to leave behind his family, particularly a girl he was supporting.

But last December, the Bureau of Immigration ordered Pope deported for overstaying and being an undesirable alien because of the complaints filed against him, including those by Rafols.

Last Tuesday, Pope shot and killed Rafols and the latter’s lawyer, Jubian Achas, inside a packed courtroom on the fourth floor of the Palace of Justice in Cebu City. He also shot and wounded assistant prosecutor Maria Theresa Casiño.

Pope shot himself after he was cornered by responding policemen.

Although he held a Canadian passport, John Holdridge Pope was born on Jan. 23, 1946 in St. Cloud, Minnesota. His  father was a chaplain who served on the islands of Guam and Iwo Jima. His grandfather was an ordained minister in the Christian Church (Disciples of Christ), a middle-of-the-road Protestant religion.

“No one in my family has ever been charged with a crime of any kind,” he said.

Pope said he worked as a journalist in a daily newspaper and as an editor in different financial and business publications.  He came to the Philippines in 1998 and was given a Special Resident Retiree Visa (SRRV).

According to Elma Corbeta, chief of the Cebu satellite office of the Philippine Retirement Authority (PRA), Pope’s SRRV application was approved after he submitted clean police and medical records and paid a visa deposit of $50,000.

In March 2011, Pope sought the cancellation of his SRRV and wanted to withdraw his visa deposit since he needed the money to pay for medication for a heart ailment and to pay the tuition of the children he was supporting.

When Pope’s SRRV was canceled, his status was downgraded to that of a tourist and he was given a visa that was good only for 59 days, said alien control officer Casimiro Madarang III.  The visa was extended once and he didn’t file for another extension, said Madarang.

Though he had been ordered deported last December, Pope could not be deported yet because his cases had to be resolved first, Madarang said.

The cases included  unjust vexation, grave threats, qualified trespass to dwelling, and malicious mischief, all of which were pending and had been filed by Rafols. He was also facing charges of violence against women for allegedly inflicting harm on his live-in partner. With a report from Jucell Cuyos, Inquirer Visayas