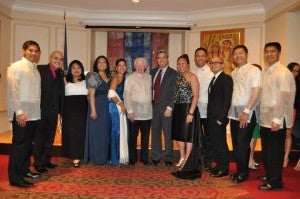 A singer, a nurse and a chef. These Filipinos echoed their praise of President Barack Obama on the eve of his second inauguration as 44th president of the United States.

“He’s for the common person, he’s grassroots. You don’t feel like he’s an elitist,” said pop soprano Stephanie Reese, who was in D.C. to perform at a gala for Asian American leaders.

The chef is Cristeta Comerford, the White House executive chef, who works closely with First Lady Michelle Obama in advocating for affordable and healthy meals for the American family. She thanked the guests for their support of her boss, the president of the United States.

FilAm community advocates and leaders offered their thoughts as Obama takes his place in history as a two-term, first African American president.

Ambassador Jose Cuisia said Obama will be “bolder” in terms of policy initiatives on immigration reform, education, and the implementation of Obama Care.

“We’d like to see the U.S. play a role in peace and stability in the Southeast Asian region,” he told The FilAm.

In his opening remarks, Cuisia said Obama’s election was “not an easy victory.”

“The results showed that deep divisions mark a large and diverse society. We’re hopeful that after the elections, the Republicans and Democrats will all unite and work together for the good of the United States,” he said.

CEO and philanthropist Loida Nicolas Lewis said Obama has the support of the Asian community.

“Seventy-three percent of the Asians came,” she told this reporter. “Foremost in our mind is the immigration reform. For the next two years, if Congress remains intransigent, let’s take out all of those Republicans who do not understand that America has changed, that we are truly a nation of immigrants.”

The Department of Labor’s Charmaine Manansala said working for the president has been memorable. “He is just a normal, normal person. He understands where we come from. He’s a community organizer and he’s one of us. His family is Asian American so he knows what our community goes through. He knows the hardship of the working class so he’s fixing something to help them.”

Assembly Member Rob Bonta of San Francisco said Obama “not only inspired Americans across this country in his four years, he also engaged them in political activism especially in the health care and gun control issues.

He said that whatever new immigration policy comes out of the second term, “it should be fair and just and should acknowledge the hard work of our community of immigrants and not be punitive.”

“It’s a tough conversation in this country,” said Bonta, “but with Obama leading the way and with the supporters he’ll have across this country, including myself, I’m confident we’ll get there.”

Gloria Caoile of the Asian Pacific American Women Leadership Institute said the White House will put immigration on the front burner this time.

“The White house told us that they are not going to ignore immigration reform — they’re going to put as much energy into it as (they did in) healthcare,” she said.

Nurse San Juan said immigration is especially important for foreign-born nurses like herself.

“I’m a nurse and I see a lot of immigrants from the Philippines and that is first and foremost in their minds,” she said. “Will they get their papers? They ask this question, and they have tears running down their faces. It’s a struggle but Obama’s leadership and his understanding about how important that (immigration) is will make him a great leader.”