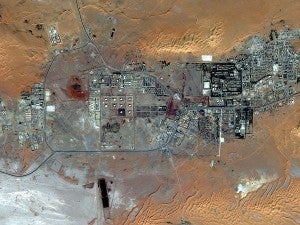 TROUBLED GAS FIELD This Oct. 8, 2012 satellite image provided by DigitalGlobe shows the city of Amenas, Algeria. At the Amenas Gas Field, 45 km from the city and not shown in this image, Algerian special forces launched a rescue operation Thursday and freed foreign hostages held by al-Qaida-linked militants, but estimates for the number of dead varied wildly from four to dozens. AP/DigitalGlobe

MANILA, Philippines–Local recruitment agencies have decided to temporarily stop the deployment of Filipino workers to Algeria following the bloody conclusion of the four-day hostage crisis that reportedly left 81 people, including six Filipinos, dead.

But Philippine Overseas Employment Administration chief Hans Leo Cacdac was quick to clarify that the government is not imposing a deployment ban at this time.

“There is no deployment ban,” Cacdac said, explaining that some recruitment agencies have agreed to suggest to foreign principals or employers to defer the hiring of Filipino workers.

He added that some foreign employers have already voluntarily stopped hiring Filipino workers for the meantime. He said there are also those who are already sending their workers home due to the crisis.

Cacdac also said that he asked the agencies, whose workers are directly affected by the crisis, to check out the condition of the overseas Filipino workers.

“They have to ensure that our workers there are safe. We have also advised agencies deploying OFWs outside the affected area to prepare contingency measures, including repatriation plans, in case the need arises,” he added.

An average of 1,800 Filipinos is employed–either as semiskilled or highly skilled workers–across Algeria a year, according to Cacdac.