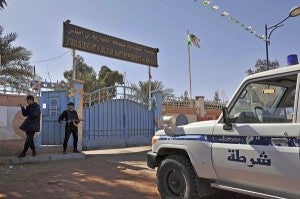 Algerian special police unit officers guard the entrance of an hospital located near the gas plant where hostages have been kidnapped by Islamic militants, in Ain Amenas, Saturday, Jan. 19, 2013. Algeria’s special forces stormed the natural gas complex in the middle of the Sahara desert in a final assault Saturday. AP/Anis Belghoul

MANILA, Philippines—Foreign workers abducted by Islamist militants in Algeria were garlanded with explosives and put into trucks rigged with bombs, the wife of one of the Filipino captives recounted Saturday.

Ruben Andrada was just days into his job at a gas plant in the north African desert when he was seized by gunmen avenging what they said was Algiers’ support for French military action in neighboring Mali, his wife said.

“According to him they draped a bomb on him, like a necklace,” said Edelyn Andrada in an interview aired by local radio station dzMM, which said the incident took place during a rescue bid by Algerian forces. (See related story in The World, Page A23.)

“Luckily, the bomb planted in his vehicle failed to explode. The bombs in the other vehicles went off and so people died,” Edelyn Andrada said.

She said her husband, whom dzMM said worked as a surveyor for a Japanese company, communicated to her by text message as he recovered at an unspecified hospital where he was being treated for gunshot wounds and cuts.

Another Filipino hostage recounted on local television Saturday how he escaped from his kidnappers’ clutches.

Jojo Balmaceda, employed by British oil giant BP, and three fellow Filipino workers were taken at gunpoint as they arrived for work on Wednesday, tied up and thrown into a truck along with Japanese and Malaysian hostages, the GMA 7 network reported.

Balmaceda escaped when the truck was hit by an explosion but sustained a gunshot wound to his head which affected his hearing, the station said.

“After that I ran away, fearing that the vehicle would explode. Then I lost consciousness and when I woke up I was already in a hospital,” Balmaceda said in a brief telephone interview.

“I hope to get on a flight so I could be back home tomorrow,” he added.

GMA said it interviewed Balmaceda shortly before he was flown to London.

Hernandez said 34 Filipino workers were evacuated from the Algerian gas field and were on their way home to the Philippines.

“We have sent a team from our embassy in Tripoli to Algeria to monitor the incident on the ground and assist overseas Filipino workers who may need assistance there,” he said.

Hernandez did not reply to AFP queries on whether there were other Filipino casualties or hostages. Press reports said at least two Filipinos were among those killed in the rescue operation.

The DFA was still waiting for a report from the Algerian government Saturday and Hernandez could not confirm the reports. AFP, with a report from Tarra Quismundo