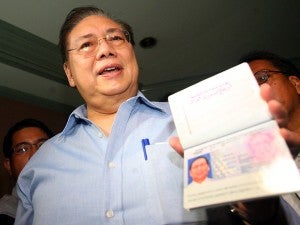 Former first gentleman Jose Miguel “Mike” Arroyo, who is facing graft cases in the Sandiganbayan, on Tuesday asked the court to allow him to travel to Japan and Hong Kong on Feb. 3-10.

Arroyo’s counsel, Edna Herrera-Batacan, said he was invited to Tokyo on Feb. 3-7 by the Association of Overseas Filipino Communities in Edogawa-Ku.

From there, he plans to go to Hong Kong where he will preside over LTA Inc.’s yearly corporate planning session and take a short rest until the 10th. Arroyo is president of the family-owned LTA.

Meanwhile, Sandiganbayan prosecutors on Tuesday described as “unreasonable” the request of Manuel Morato, a coaccused of former President Gloria Macapagal-Arroyo in a plunder case for the alleged misuse of PCSO funds, to be placed under house arrest. Cynthia D. Balana