PH nurses to the rescue 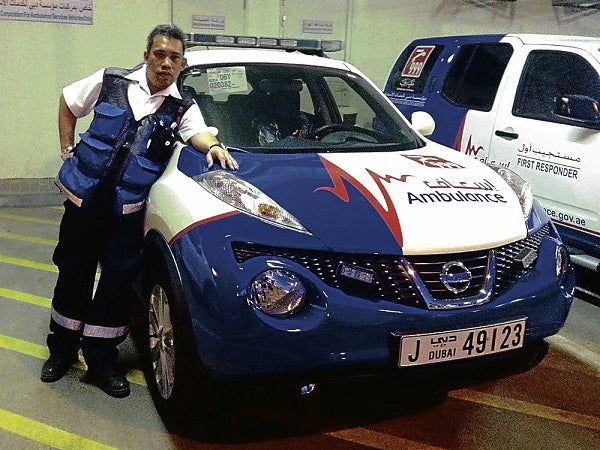 DIAL 999 Geoffery Panganiban in front of one of the smaller ambulances of the Dubai Corporation of Ambulance Services, where he works as a prehospital emergency nurse.

Hazel Margarita and Geoffrey are Filipino nurses, a growing presence in the government-backed Dubai Corporation for Ambulances (DCAS), one of the most modern ambulance services in the world.

“As an ambulance nurse, I have to attend to different kinds of emergencies. Most patients are those involved in road accidents and work or house emergencies. Most common cases are trauma, cardiac case, and diabetic emergencies,” explains Geoffrey.

Technically, they are pre-hospital ambulance nurses or paramedics. They are the first to respond and bring the victim to the hospital for further treatment.

Another overseas Filipino, Robert Fortinez of North Cotabato, has been working for 14 years as an emergency medical technician.

“We often work with the police and firefighters, since some emergency cases are accidents,” he says.

established the Dubai Corporation for Ambulances (DCAS), which now has more than 60 ambulance stations working 24/7. 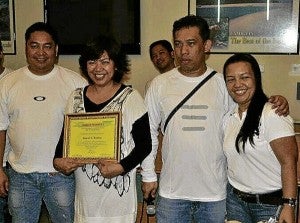 What they call “Mama units” are ambulances exclusively for emergencies involving a female patients, mostly obstetric or childbirth emergencies.

Dubai, by the way, holds the Guinness record for having the largest ambulance in the world. The rich kingdom acquired in 2009 three Mercedes Benz Citaro bus-clinics comprising an operating theater, three intensive care units and eight immediate care units. Two of the clinic-

buses have a length of 12 meters while another is 18 meters long. They are available for rapid medical assistance, particularly in the event of major emergencies with a large number of injury victims. The DCAS has also licensed private air ambulances, also equipped with intensive care units.

Geoffrey, from Abra de Ilog, Occidental Mindoro, has been working with the ambulance service for five years now. In the Philippines, he had gained experience in rescue operations as a Red Cross nurse and a member of the UP Mountaineering Society.

“My work is very similar to paramedics in the TV series 911. I am under the ambulance operation department of DCAS. My office is my ambulance rig. An ambulance in Dubai is manned by two nurses and a driver,” explains Geoffrey.

He says weather conditions in the Middle East also make their work challenging.

“Can you imagine responding to a car accident under direct sun of almost 50 degrees Celsius? I have to carry a 20-kilo kit, kneel on concrete hot pavements and lift patients that are sometimes double my weight,” says Geoffrey.

Hazel Margarita, who takes the calls, has been working six years as an emergency medical dispatcher. She immediately guides callers on first aid steps while locating and dispatching the nearest available ambulance.

Margarita’s job requires her to have knowledge of the Arabic language as well as familiarity with the streets and landmarks in Dubai to be able to guide the ambulances  to the caller’s location.

A nurse needs to be able to imagine or picture the situation and guide the caller through initial first aid steps while he or she waits for the ambulance.

Confidence, patience and better judgment are needed in this kind of work, sums up Hazel Margarita.

The Filipino sense of humor and natural adaptation to any environment make them stand out among others, believes Hazel Margarita.

“We are hard working. In spite of the difficulties of any emergency situations, we show coolness and manage to smile and laugh,” she asserts.

Geoffrey, for one, is more than just an ambulance nurse. He has organized a mission for distressed OFWs housed at the Philippine labor office in Dubai.  The project is implemented in coordination with Migrante Dubai, a private organization for the protection of Filipino migrants.

Geoffrey has also initiated humanitarian activities like the packing of goods for relief in troubled areas in Gaza and Pakistan. He was endorsed by the operations manager of DCAS to the Dubai Red Crescent where he has become one of its few Filipino volunteers.

“Wherever we are, we love what we are doing. We are always motivated, not only by financial gain, but even more by our commitment to service to others,” adds Robert.