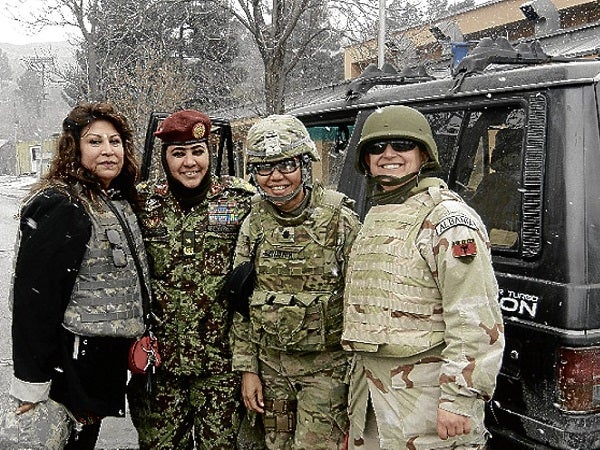 FROM ESPAÑA TO KABUL Capt. Analiza Benjamin, Class ‘83 of the University of Santo Tomas’ College of Nursing, (second from right) with Connie, her Dari interpreter; General Khatul, the highest-ranking female Afghan general; and First Lieutenant Gremi, an Albanian military nurse. Dari is the language spoken in Afghanistan. PHOTO: The FilAm

Nurse Analiza Benjamin is currently serving in Afghanistan as a health care mentor, a job description that brings her in “direct contact” with the Afghan National Army.

A reserve officer of the US Navy with the rank of captain, Analiza is one of more than 30,000 coalition forces keeping peace in Kabul. Specifically, she is one of the nursing advisors or mentors assigned to Afghanistan’s National Military Hospital. This is her first time to be called for active military duty.

“My role as the Senior Nurse Advisor to the Afghanistan National Army hospital’s chief of nursing department is interesting and challenging,” she said in an e-mail to The FilAm.

Analiza’s assignment is directly connected to the US government’s “drawdown plan” to pull out American troops and hand over the security of the country to Afghan soldiers by 2014. She is part of the healthcare mentoring team, which will ensure the smooth delivery of health care services in the aftermath of the pullout. But she won’t be staying till 2014. Her year-long assignment will end in April 2013.

“We play a significant and important role in this mission (paving the way for) Afghanistan’s transition and autonomous government,” she explained. “We are part of the International Security Assistance Force (Isaf) mission that supports the government of Afghanistan as Isaf conducts operations in Afghanistan to build a secure and stable environment that reconstructs and develops infrastructure, improve the delivery of healthcare, and assist with their governance development.”

“It’s great to be a Filipino American, working as a senior Navy nurse corps officer here and serving our country (the US),” Analiza said proudly.

The assignment comes with great risks. She is stationed in a country where bombings are a recurring threat common and the Taliban forces are believed to be resurgent. CNN recently reported a car bomb attack outside a US military base in eastern Afghanistan. Three people died and six others were injured.

“While there is always some personal risk, our mission is not directly kinetic,” said Analiza. Their advisory mission differs somewhat from that of the Isaf which tends to “focus on the combat-action tactical phase of the conflict,” she explained.

With this one-year tour of duty, Analiza leaves behind three daughters in New York. Two have finished college and the youngest is a senior high school student at the elite Manhattan Center for Science and Mathematics. The Manila-born Analiza is divorced.

Analiza graduated from the University of Santo Tomas College of Nursing in 1983 and worked as a critical nurse in the UST Hospital. She got married after college and had her first daughter at the age of 20. She left Manila in 1985 and found work as a Critical Care Nurse at the Jacobi Medical Center in the Bronx. She resigned in 1991 with the title of Assistant Head Nurse and moved to Jersey City in 1992.

But then, she missed New York, she said. She returned to Jacobi Medical Center and took advantage of the hospital scholarship program to finish her Master’s Degree in Nursing in 1995 at Columbia University. She was promoted that same year and worked as Nurse Practitioner at Jacobi.

“In trying to find more meaning in what I am doing in this life or probably to make my life more interesting, I joined the military, the US Navy Reserve—Nurse Corps in 1997,” she said.

After her tour of duty ends in April, Analiza will return to the two posts she left when she answered the call for deployment: the Operational Health Support Unit of the Navy Operational Support Center in Ft. Schuyler in the Bronx; and the Jacobi Medical Center where she holds the title of Senior Associate Director for the Education & Training.

Most importantly, she said, “I will be joining my daughters in my home in the Bronx.” The FilAm